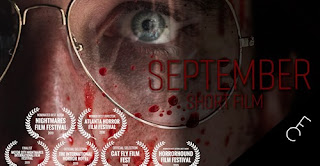 A serial killer goes about his evening routine until he is interrupted by an uninvited guest.

“September” takes a dive into a serial killers' world. This short film opens with a killer coming home with his latest victim. He unloads them, takes them to the back of the house, and snaps a few pictures of them. He then comes back to the house, and shows the audience just how organized of a serial killer he is. Of course he's hungry after all the work so he prepares a snack, but his meal is cut short.

Before he can sit down to enjoy his sandwich, notices something strange at the door. He then finds some of his things have been moved. This can’t sit well with someone so organized. As his anger builds he heads to the bathroom where the shower is running. The film comes to a head when it appears the killer meets his unexpected visitor.

“September” is a very interesting short film because instead of leading the audience to a kill it examines what the killer does after. It’s crazy to see how organized the killer is even though it makes sense that he would be, especially doing it as much as it appears he does. It also sprinkles in a feel of normalcy reminding the audience a killer can always be living next door. And then the best thing about the film is watching the killer’s comfortable setting suddenly become uncomfortable for him. They draw out the suspense nicely, and like it or not, leave the ending to the audience’s imagination. A final hats off to actor Jeff Payne for managing to nail being a serial killer without having to say anything. Now it’s your turn to see what you think of this risky ending in the short film below!