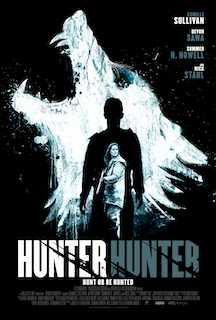 Joseph and his family live in the remote wilderness as fur trappers, but their tranquility is threatened when they think they are being hunted by the return of a rogue wolf, and Joseph leaves them behind to track it.

Directed and written by: Shawn Linden

“Hunter Hunter” takes audiences into the wilderness, and examines who is really the hunter. Joseph (Devon Sawa), his wife Anne (Camille Sullivan), and young daughter Renee (Summer H. Howell) have spent a lot of time surviving in the woods. Many things can put their lives in danger living alone out there, and for now it appears to be a wolf. The wolf seems to be eating everything they’re trapping for food and fur, and they worry about their safety as well.

Being a good hunter, Joseph decides to put an end to the wolf, and goes hunting for it. Renee is eager to follow in her father’s footsteps, and insists on accompanying him. Maybe not the best idea, but he takes her with him anyway. Everything is fine to start, but once he closes in on the wolf he sends her back home. Renee, and her mom are then forced to wait for his return as their survival continues to be threatened the longer he’s away. 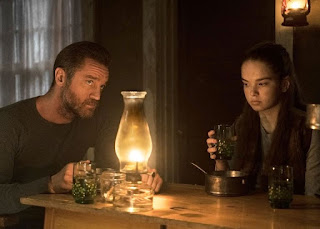 In order to enjoy this film the audience is going to have to be patient with it. It starts off introducing the family, and what they’re doing in the wilderness. Joseph spends time showing Renee the tricks to hunting, and then what to do with the kills once they’re brought home. The drama starts with mention of the wolf, and the need to get rid of it. More drama is created with Renee insisting on going with her dad to hunt the wolf. Hunting the wolf does bring in some excitement, but soon enough the audience is going to realize this isn’t a man vs wolf horror film.

When Joseph appears to be closing in on the wolf he sends Renee home for her safety. He eventually stumbles upon an area where something  extremely awful has happened, and the film finally hints at the horror to come. Hinting at the horror is one of the many things this film seems to do well. After that glimpse of it, the film takes the audience away, and focuses on Anne and Renee again. Drama is built up as they wait anxiously for his return, and they’re continually concerned about the lurking wolf. 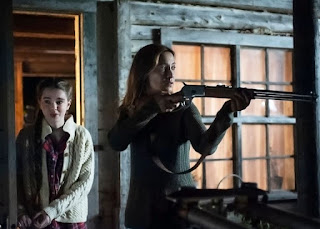 The film even introduces two rangers, who at first seem like comic relief, but eventually play a part in how everything unfolds. There will be nothing to laugh at when it’s hinted horror might be coming their way as well. Not wanting to give any spoilers, lets just say stick with the story because the payoff is beyond worth it. True horror will show its face by the time this story ends. Not only is it beautiful from a horror standpoint, but it’s nice to see it's justified by the events earlier in the film.

“Hunter Hunter” starts off like a slow burn that might not grab everyone’s interest at first. However, it does so many things well leading up to one of the most horrific ending scenes you'll find! Camille, and Summer are fabulous in their roles, and so is Devon even though his time is short. The second half of the film really works because Camille and Renee bring out the fear and desperation their characters are in. Another thing that works well is the pacing, and sense of realism of the situation. When the few hints of horror are dropped the audience will get just a short time to think about it until they get sucked right back into what the family is going through. That is until horror slaps them in the face in an absolutely horrific final scene. I seriously wish I could say more about that scene, but I don’t want to ruin it for anyone. So I’ll leave it at that, and give the film 4 pools of blood!

"Hunter Hunter" is available in Select Theaters, Digital and On Demand December 18th!

More info about this film at: http://promotehorror.com/2020/11/18/official-trailer-for-hunter-hunter-in-select-theaters-vod-and-digital-december-18th/