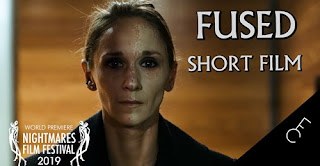 A woman with a rare medical condition, believes she is responsible for several murders in the Kansas City area.

“Fused” opens with a trip to the doctor’s office for Sarah. It’s not her first time there, as she seems to have a condition that the doctor is trying to figure out how to cure. On the way home, she has to pull over because she’s not feeling well. A  jogger comes to help her out, but that help isn’t very welcome. She also hasn’t been very welcoming to her girlfriend Cassie, who comes knocking on her door looking for answers.

Later that night the two have a serious conversation about her illness. What appears to be a skin condition is a whole lot more. She talks about blackouts and events she can’t remember before mentioning she has another set of DNA in her. With that, Sarah asks Cassie to watch over her for the next few days in case anything strange happens. Of course things seem fine for a couple of days until they’re not anymore.

This short film begins with some mystery, but doesn’t take too long before it starts to unravel it. Sarah has an interesting condition that can lead this film in many directions. If the audience catches the first couple of clues they will know this isn’t going to end well. Sarah Mcguire puts on a great performance especially in the film’s final moments. Also, the film does well to keep it’s dark tone and imaginary the entire time. Now it’s time for you to check out “Fused” below!