FEAR OF THE WOODS REVIEW 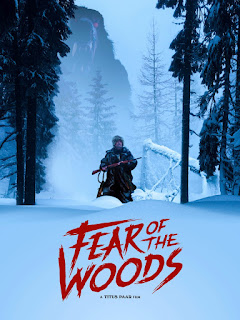 Deep in the snowy hills of Alaska during the early 1990s. A large number of cattle have mysteriously vanished without trace from near a small ski-resort in one of the valleys. Not as much as a singe drop of blood left in their wake. The local hunting team lead by Damien’s father is given the task of finding out if a bear lies behind these attacks.

Directed and written by: Titus Paar

Some people might not have a “Fear of the Woods,” but that might change once they see what’s waiting for them in these snowy hills. Damien (Christian Arnold) is following his dad (Vernon Wells) and his Uncle Joe (Ralf Beck) into the woods to find what has been killing people’s cattle. Not many people seem to know what’s doing it, but his father is pretty sure it’s a bear. A special bear that might act differently than the average one.

Uncle Joe seems to sense something is out there, but Damien is doubtfully. He listens to his dad talk about the bear as they continue their search. Damien is pretty much just thinking this is one of his father’s tales until something makes its presence known. Suddenly Damien and the others find themselves part of a tale they might not survive.

The imaginary in this short film is simply fabulous. The winter snow makes everything look so refreshing, and the filmmakers make the most out of it to make the bear even more menacing than it already looks. The bear doesn’t need much help because it’s seriously badass. It will definitely have you jumping out of your seat when it first appears.

It’s great to see Vernon Wells lead this expedition, and go face-to-face with the bear. There’s some good tension and suspense in the final moments that will have you wanting more. Audiences were supposed to get just that from “Fear of the Woods,” as it originally was supposed to be a full length feature film, but COVID-19 put a stop to that. After watching this short you’ll see what a shame that is with everything they accomplished in about twenty minutes!  Enjoy the short film below, and see why this bear will make you stay out of the woods!