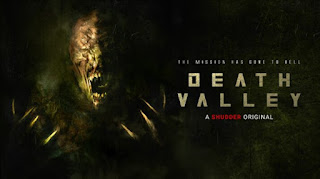 Mercenaries with nothing to lose are hired to rescue a bioengineer imprisoned in a cold war bunker. Upon entering the ominous facility, they find themselves in a fight for their lives when they come under attack from an unknown and deadly creature.

Directed and written by: Matthew Ninaber

This “Death Valley” will come with some deaths, and some surprises. In an underground facility something has gone extremely wrong. Dr. Chloe (Kristen Kaster) is trying to escape, but appears to get locked in with something lurking inside. She makes a call asking for someone to rescue her before it’s too late. Luckily, her call gets answered, and a small group of soldiers is on the way.

Unfortunately for Marshall (Ethan Mitchell), Beckett (Jeremy Ninaber) and others, they have no idea what they’re getting into. Before they can reach the facility, they’re attack by another group of soldiers. Apparently this group is interested in what the doctor knows, and wants her for themselves. The two sides fight it out before Marshall and Beckett finally find themselves inside. While they search for the doctor something will be searching for them.

It won’t take long before the audience realizes this film is just as much an action movie as it is a horror movie. An action/horror movie that feels kind of familiar in some ways. Research as gone wrong creating a creature, people get trapped and need rescuing from the creature, and the group doing the rescuing are in for more than they bargained for. However, this one does sprinkle in a couple of nice little twists before it ends.

And how about all the action and horror? Well the action is actually pretty good. The fight between the two groups of soldiers early on injects some excitement to get this one started. Bullets will fly and people will go down, but it gets interesting when the bad guys take a hostage and introduce him what’s really going on here. There’s an even better more physical fight leading to the end.

Of course the horror is driven by the creature. It’s a nasty looking thing that hunts by sound because it lacks some eyes. As gruesome as it looks it would have been nice to see it really go to town on someone. They do make good use of it sneaking around in the background. Another thing at play here is that others can be infected and change as well. This also sets up some added bloody situations.

“Death Valley” manages to give the audience a little bit of everything it needs. There’s plenty of action including a gun battle early on, and a brutal fight to conclude things. There’s a creature that the audience wouldn’t want to find in its nightmares, along with some sort of virus that can change others as well. The twists give the story that little something it needs to be different. Ethan and Jeremy are great as their soldier characters, and they find just the right time to sneak in some slight humor in a dark situation. With that, I give it 3 pools of blood!

More about this film at: http://promotehorror.com/2021/11/17/gory-monster-film-death-valley-comes-to-shudder-on-december-9/