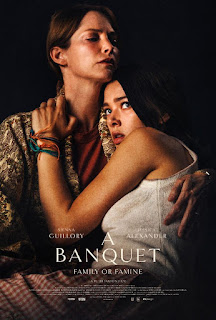 A widowed mother is radically tested when her teenage daughter insists a supernatural experience has left her body in service to a higher power.

“A Banquet” of food is offered, but there’s a lack of appetite going around. There’s no blaming anyone for the lack of appetite after the disturbing opening. Holly (Sienna Guillory) is taking care of her apparently sick husband, but isn’t there in time to save him from poisoning himself. The death hits her hard, but also is effecting her daughters Betsy (Jessica Alexander) and Isabelle (Ruby Stokes).

Betsy seems to get the worst of it, as she now struggles to eat. She’s not hungry anymore, and goes into convulsions when she’s basically forced to swallow anything. It might be expected after the loss of her father, or maybe even if it’s just a medical condition. However, as this moves on she gives a bizarre explanation of her body now belonging to another being or power. This doesn’t sit well with Holly, and the two continue to fight for whatever is left of Betsy.

This story is definitely a slow burner, as it takes its time exploring Betsy, and her eating issue. It starts with what any parent would do in trying to get her to eat even the simplest things like a pea. Betsy can’t handle it so of course the next step is doctors who are no help either. When that all fails it becomes a family drama in the battle to figure out what’s wrong with her. Holly is still feeling the loss of her husband, and fears losing her daughter as well. Isabelle almost gets lost in their battle, but is definitely effected by this new environment around her.

Since the story features a girl who doesn’t want to eat why not take the opportunity to focus on food? It focuses on food like taking extreme close ups, and watching it being prepared and cooked. They really do get some great shoots of the food, which is a shame Betsy and the audience don’t get to taste. Then it gets a little gross as the story finally gets a little closer to this mysterious side of Betsy. It brings on a scene that gives a little reminder of something like Pizza the Hut from “Spaceballs,” but a lot darker.

“A Banquet” serves up a strange slower burner of a story. It appears at first to be simply about a girl not wanting to eat, but becomes a lot more. Betsy is completely overtaken in her belief that she has given herself over to another being. Her family can’t accept this, and continues to fight for her to eat again. Each person has their own battles as well not making it easy on this family. The imagery stands out here, particularly a close look at the food. Too bad this isn’t a cooking show. Of course a strange story is going to have an odd ending that might be hard for some to digest. With that, I give it 2.5 pools of blood.

More about this film at: http://promotehorror.com/2022/01/28/apocalyptic-mother-daughter-psychodrama-a-banquet-opens-feb-18th/