MASK OF THE DEVIL REVIEW 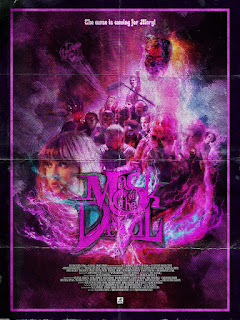 After accepting a job at a low-rent pornographers, a feisty young woman must fight to survive against an ancient evil intent on killing everyone in its path.

If you put on the “Mask of the Devil” you better be ready to unleash hell on all those who come before you! It’s 1878, and a group of Englishmen are trying to steal a mysterious mask from the natives. Unfortunately, things don’t go as planned, and an ancient evil is released. That only means it will soon be released somewhere in the modern day world, and it’s going to be a very unlikely place.

The opening scene in the jungle sets the tone for the blood and guts to come. The mask attaches itself to people on set leading to the deaths of most of the cast and crew. There will be plenty of blood on set, and coming at the audience. They mix it up with both practical and CGI effects.

“Mask of the Devil” is certainly for the slasher fans out there. It gets bloody in the jungle, and even deadlier on set. The practical effects are pretty good regardless of some the CGI mixed it. When not killing off people the film manages to squeeze in a little humor from characters that will be meeting their doom soon enough. Hidden in all of that is a final girl, and a crazy ending the audience would expect. With that, I give it 3 pools of blood.