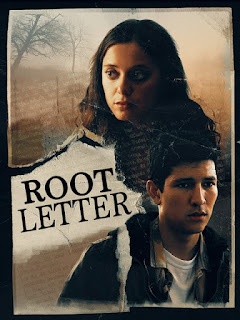 The film centers on Carlos, an impoverished teen from a fractured home, as he attempts to reconnect with Sarah, a school pen pal after he receives a desperate note from her claiming that she has killed someone. As Carlos travels to Sarah’s hometown and investigates, he uncovers a criminal plot involving Sarah’s fraught group of friends, and a chilling secret which has led to Sarah’s disappearance.

“Root Letter” reminds us all that there was a time when people did write letters to each other. Sarah (Keana Marie) starts the letters not because she has to, but because it’s an assignment in school. She’s supposed to find a pen pal, and send them several letters. Her pal turns out to be Carlos (Danny Ramirez), who happens to be going through a rough time in his life when the letters start. The two go beyond Sarah’s school project, and keep in touch for awhile.

Before thinking that a romantic relationship is developing, their letters end for about a year. When Carlos seems to be getting his life back on track again, he receives one more letter from Sarah. While she doesn’t say to come looking for her, the message is concerning enough to him that he decides he must find her. He doesn’t have a lot to go on, but will prove to be set on finding her.

As the movie goes on, the audience gets to see two things. One is obviously Carlos putting together the clues to find Sarah, and the second is what has been happening to Sarah over the past year to make him need to find her. The audience won’t get to learn a lot more about Carlos since his focus is on finding Sarah. He will show how determined he is, and that a pen pal can be pretty loyal.

The true mystery here is what has happened to Sarah. The audience will learn that drugs play a role in things because her mother is an addict, and her friends are split between users, and sellers. The more they learn the darker the picture will get. It’s not a story about a monster or stranger coming to get her, but about the realities of not being able to escape a life you don’t want.

“Root Letter” is definitely a slow burner, and surprisingly based on a video game. I don’t know anything about the game so I can’t say how closely it follows the game. It does seem closer to real life happenings than a game. The audience is introduced to two young people who just want a normal life, but the world around them makes that almost impossible. It’s not the most myserteous story or big time thriller, but does touch on the true horrors of life. The movie won’t be for everyone, but more so for those who can relate to their struggles. With that, I give it 2.5 pools of blood.

More about this film at: http://promotehorror.com/2022/08/12/root-letter-starring-top-gun-mavericks-danny-ramirez-is-coming-out-september-1/