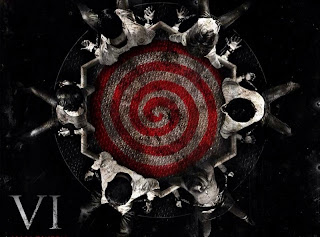 So this franchise has made it to number 6. Some people think that is a good thing, but others think they should have stopped making these movies a long time ago. I am in the camp that says keep making these movies, even though I did not like part 5. After watching part 6, I say lets do it again.

As I mentioned, I did not like part 5, but was very pleased with this latest installment. I felt this one stuck to the usual Saw formula, but they kept it simple this time. Basically, the formula is starting off with some people playing the game in order to start off with a kill, following Jigsaw’s replacement (Detective Hoffman) as the cops try to figure out who was carrying out Jigsaw’s game, and then there is the all important game that is being played. Of course, they had to throw in the usual twists. This time the twists were toned down, just a small twist here, and small twist there. They did not try to over think themselves.

My favorite thing about Saw, besides the twists, is the game. Of course, that is because that is where all the blood and guts come in. It is really what makes Saw a true horror film. This time, the game focused on William, who was a top executive at an insurance firm. He becomes the focus of Jigsaw’s game because he denied health insurance to Jigsaw several years earlier. We get to see deaths by a body getting crushed, a hanging by a barbed wire, and a merry-go-round (of no fun) as people are shot by a shotgun. Again, back to the theme of keeping it simple. Not the most creative deaths, but effective enough. They were really focused on the decision that William had to make. The one traditional Saw device I think I might be getting tired of seeing is the iron mask that is attached to people’s head. Lets see if they can come up with something different.

There were a few specific scenes I particularly liked. The opening scene of the movie is usually good. It sets a good tone for the deaths that are to come. This time a woman and man are matched up to see who can give up the most flesh before time expires. They are opposites as the man was a fat guy, and the woman was skinny. It was funny to see her expression as Jigsaw said they would have to give up flesh, and she had to look at herself to find some flesh to cut off. Added to the fun was a device attached to their heads that was drilling a screw into their skulls. Another scene that was really good was when the six people are strapped to the merry-go-round awaiting their deaths. William got to chose two of the six to keep alive. What made this scene was the combination of terror and laughs. The terror obviously from the impending death of four of the people, but the laughs as the people lie about themselves and each other in order to convince William to save themselves. **(possible spoiler here-->>)** A third scene I liked was when William finally died. For a good portion of the movie there were two big containers filled with hydrofluoric acid. Both the characters and the audience wondered what they would eventually be used for. Well, sorry to say for William, but they were for him. A large device came down striking him in the back in order to inject him with the hydrofluoric acid. He began to melt away as his body was filled with more and more of the acid. Not to be mean, but I thought it was a very fitting end for William (take note insurance salesmen for the next time you deny someone coverage).

This Saw did something I was not expecting. We got a political message from Jigsaw himself. I know he preaches a lot about the game, and the importance of life, but he actually gave a political message about health care. It was funny because it got some cheers and laughs from the audience. I guess the way it is going, the health care debate qualifies as horror too.

A couple of random questions came to mind after watching the movie. Why can’t the police locate where Jigsaw is playing out his game? They know it has to be a large, dark, and abandoned place. This time it was in a zoo. No, not a good place to look for Jigsaw! Another thing I was wondering about was the time line of the whole franchise in general. I say this because of all the flash backs of Jigsaw they show. Sometimes, he appears to have a lot of hair, sometimes he does not. Sometimes he looks sick, and other times he looks healthy. Maybe it is just me not keeping up. One more random thought, just how many people have crossed paths with Jigsaw and happened to piss him off? He has had a great deal of people killed. While the focus was on William in this one, he also kills about 6 other people that worked with William.  I mean, if you screw up his dinner order one night, are you next? Does he plan your death right there? I guess I am saying if they do a part 7, what excuse are they going to come up with for Jigsaw wanting them to play the game?

Speaking of a part 7, there is usually a twist at the end that will lead on to the next movie. I did not think the twist at the end set a definite direction for a part 7 based on the end of this movie. I think they left it open and hopefully they can come up with something creative. They did not really leave anything to think about like the tape Jigsaw swallowed, or the contents of the box that we get to see in this movie. Maybe, I just missed it, as I missed the whole tape swallowing thing before.

Staying with the theme of keeping it simple, let me wrap this review up. If you did not like part 5, I think you there is a chance you will like part 6. They kept it simple and did not try to confuse the audience with all kinds of crazy twists. The twists were on point and answered some questions from previous movies. The game was well constructed with plenty of blood and guts. Not the best movie of the Saw franchise, but it got the series back on track, so I give it a strong 3 pools of bloods.