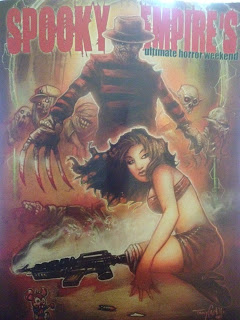 This was a year of change for Spooky Empire’s Ultimate Horror Weekend, as they changed venues. Regardless of the new hotel, the Hilton Orlando, the convention still proved to be a terrific show for horror fans. As usual, there were panels, Q and A’s, movie showings, merchandise and autograph room, and several special events.
Instead of going day by day, I’m going to change it up this year and give you a few thoughts on some of the activities I attended in general. Some pictures and videos’ll help me along. Also, I’ll let you in on some of the activities and celebrities that were there whether or not I saw them. 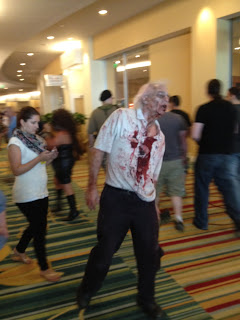 As usual the convention kicked off with a zombie walk, and definitely as usual I caught the end of it. Why… because I was busy being zombified! 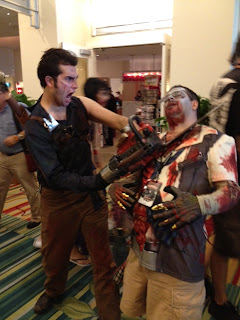 It’s always fun seeing all the zombie costumes, and taking pics like the one above.
Q and A’s:

There were many great Q and A’s, but my favorites were The Devil Reject’s and John Kassir (Crypt Keeper). If I had known they were going to turn out to be so awesome, I would have recorded the entirety of both. As you might expect, The Devils’s Rejects was filled with many crazy stories. Sid and Ken were definitely having a good time, and loved every second they got to talk. Hopefully you watched the video, as Tyler also had a funny story about Halloween.

When I got to meet John prior to the Q and A, I quickly realized what a cool person he is. He was having a great time interacting with fans, as he signed autographs and took pictures. He continued the great interaction right into his Q and A. I have to admit, I didn’t know much about his career besides being the Crypt Keeper, and it was extremely interesting hearing how he got started.

Two more standing room only Q and A’s were with the cast of A Nightmare on Elm Street 4, and Rosen McGowan. Of course, I’m always interested to hear stories from Robert Englund, but it was cool seeing the rest of cast as well. I was surprised to see how young many of them looked. I never realized they were that young when they made the film. Also, I never realized Rose had such a strong following, but I wasn’t surprised that she didn’t hold back when answering questions.
Other Q and A's: Heather Brewer, Cast of Zombie, Tom Savini, R.L. Stine, Kane Hodder, and Cannibal Holocaust

These special events were something new to me. The MuckleBones Monster Museum had its own room for all the displays you see in the video. They did a wonderful job making everything look so real. You can also tell they made for fun photo ops. As far as the Hearse and Creepy Car Show, there weren’t as many hearses as I thought there would be, but they certainly picked some good ones for the show. As you can see, the coolest one was the coffin car. Now I would love to see people’s expressions as that thing drives down the street. The Evil Puppets table was also interesting; as it brought back memories of puppets I haven't seen in years like Critters, and Dark Crystal.
Other special events: Tattoo Festival, Celebrity Charity Poker Tournament, Bands and Live Performances, and the Bloody Mary "Hands On" Makeup To Die For Zombie Workshop

If you were looking to spend money on horror merchandise, then this was the place to be. There were all kinds of great things to buy like old movie posters, figures, exclusive merchandise from other conventions, and plenty of other oddities. The room also featured many artists looking to sell their work. It’s always amazing to see some of the creative stuff they come up with.
More of my money went to autographs. It’s not ever day you get a chance to get meet these people, although I still can’t believe I’ve met Robert Englund twice, and Kane Hodder multiple times. I chose not to have anyone else sign my “Icon” T-shirt this year. Instead, I had Robert and Kane sign the shirt you see in the video (at least I thought it was funny). I was excited to get some new autographs this year from the likes of Tyler Mane (damn is he tall), Sid Haig, and IronE Singleton (R.I.P. T-Dogg). Yes, I can’t believe he got killed off right after I got to meet him. He was super cool, and having a blast with all the fans.
Other celebrities signing autographs: Rose McGowan, Heather Langenkamp, Steve Dash, Lawrence Harvey, the cast of A Nightmare on Elm Street 4, and many more.


As you might be able to tell, there were several firsts for me this year, including the V.I.P. party. The party provided a good chance to mingle with some of the celebrities. I’m not sure how they decided to do it, but it seemed like celebrities would come in and talk with people for a while. Then they would leave and other celebrities would come in, and do the same. Some of the celebrities that attended were members of the cast of Nightmare on Elm Street 4, Tyler Mane, Ruggero Deodato and Lawrence Harvey. 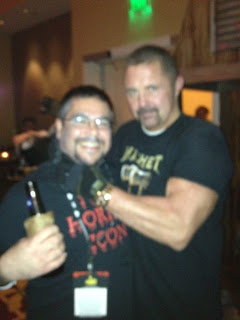 Story telling time… as you can see from the above pic, I jumped in for another hard choking pic with Kane. When I stood next to him he mentioned that he had the shirt I was wearing. Of course, I reminded him that I gave it to him. He told me that he actually wore it during a webisode he filmed. Yes, it made this horror dork extremely happy to hear he actually wore it. The next day was when I actually got his autograph again, and of course I mentioned the shirt to him. He said he wore it while filming a paranormal webisode at the Stanley Hotel. I will definitely be on the look out for that. Oh… and Robert said his wife wears the shirt I gave him. Ok sorry for the story telling. 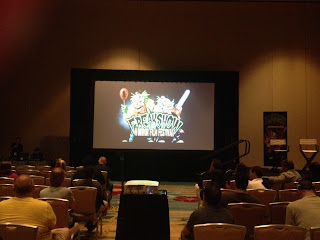 I didn’t get to see as many of the movies as I wanted to. I was interested in several of them because I featured them at PromoteHorror.com, but they weren’t playing at times I could make it to. However, I did see “Spiders 3D” in 2D, and lets say the best thing about that was getting a free T-shirt. I did see a short film called “DeadBox,” which was based off of the Redbox machines you might have seen that was actually pretty good. They were also showing movies besides at the festival where I got to see “Zombie” for the first time. It was definitely pretty good in its time.
Other movies being shown: A Nightmare on Elm Street 4, Frankenhooker, and Cannibal Holocaust 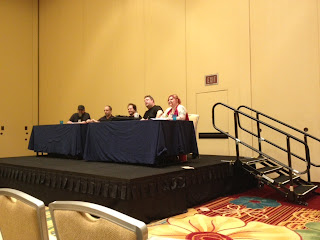 They had many great panels as usual. Most of them were held by some of the authors that attended the convention. They usually put a great group of authors together with an interesting dynamic, and definitely opinionated. One of the more intriguing panels I attend was the one about remakes. Yes, the R word! Not only was it interesting hearing the panel’s opinions, but also it was interesting hearing the opinions of other fans.
Other panels: What Scares Us, Cryptozoology, Sick and Twisted, and Vampires.
Well, I could go on and on, and even tell more stories, but I will leave it there. There will be more videos of some of the other Q and A’s and pics on the Spooky Empire 2012/2011 Pictures and Videos page. I hope this gave you a little taste of what the convention was all about. Maybe I will see you there one day!