BEHIND THE SCENES: "EVIL DEAD" HOUSE AT HALLOWEEN HORROR NIGHTS 23 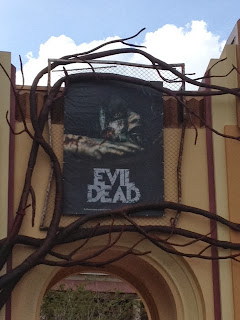 Part of my Halloween Horror Nights 23 (HHN) adventures at Universal Orlando was taking the Unmasking the Horror Tour. This tour takes fans on a behind the scenes look at their haunted houses. Our tour took us into 6 of their 8 houses. I decided to break them each up into their own post in order to give a better look at each of them. This is a behind the scenes look at the “Evil Dead” house.

The above video is a series of photos that I took while on the tour. What I will be doing now is describing some of the things you saw in the video, so you might want to read this and then go back and watch the video again. The house starts with a look at the famous evil Book of the Dead, and some of its pages. Then you walk under the sign that says, “Evil Dead.” If you are wonder why I didn’t get a better picture of that it’s because of how the rooms are connected. There is a big curtain there, which doesn’t allow you to step back, and take a full picture. 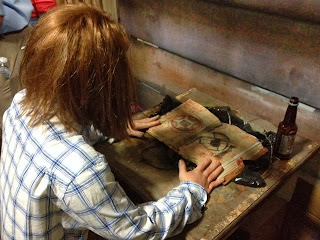 From there we go into the first room of the house. On your right, you find Eric reading the book, and releasing the evil. You can see I took a picture of the book, and even snuck in a pic of his face. When the house is open, the wall in front of him is a screen showing the evil traveling through the forest like in the movie. 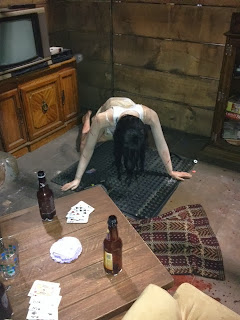 As we move to the next room, we see the evil has now taken over Mia. When we get in the room, you can see Mia bent over on the ground. At night, a scaractor lays under her, as if Mia is vomiting on them. Again I took a pic of her face, and no she didn’t vomit on me (thank God). 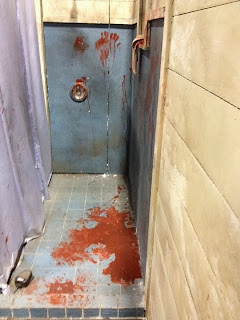 The series of scenes from the movie continues, as we are in the bathroom where the Olivia decides to slice open her mouth. She isn’t in the pic, but at night the scaractor playing Olivia is hiding in the showing waiting for you to walk by. I like the bloody mess she has made! 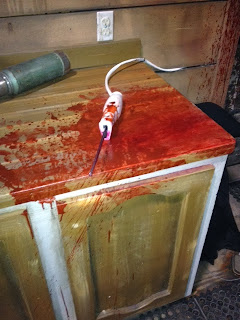 This bloody mess continues into the kitchen, where there is more body mutilation going on. Here we are in the scene where the Natalie tries to cut off her arm. At night the scaractor playing Natalie is sitting in the chair doing just that. As you walk by at night, you just might be hit with some water simulating the blood gushing from her arm. 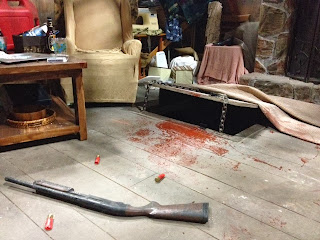 Then onto one of the more recognized scenes of the movie. In the hatch to the basement, the scaractor playing Mia sits telling everyone that they are “going to die tonight!” At night, it was certainly one of the fun rooms to go in because we have all seen that scene over and over in the trailers. 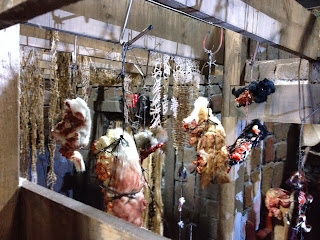 From there we start making our way out of the house, but not before running into some interesting decorations. There are cats, and other creatures hanging from the ceiling. Once outside, we are basically at the end of the movie. You see the car, which is flipped over in front of the house. At night, they have fog, and mist blowing at you to simulate the raining blood at the end of the movie. You might also want to watch out for who’s hiding in the bushes. The house then ends with another look at the book on a swing, and more pages hanging on the wall. 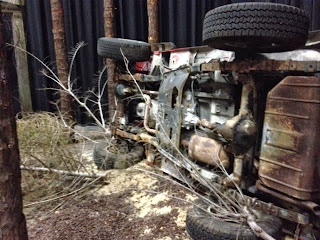 Overall, I think they did a good job recreating scenes from the movie. The makeup used on the bloody scaractors was great. Maybe the house wasn’t that scary, but I enjoyed how it got bloodier as we went through it. I also got a kick out of the Mia saying that we are “going to die tonight!” It definitely made me feel like I was in the movie. So that was a look at the “Evil Dead” house. If you have any questions about the house or HHN, please feel free to ask. Also if you want a better look at a specific pic from the video just ask. 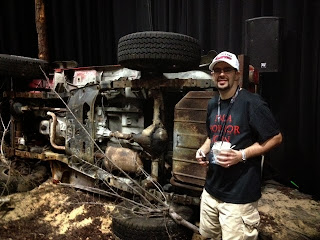 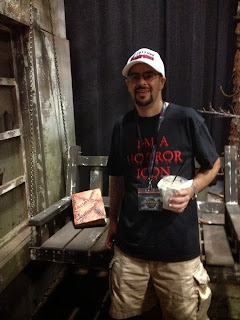