IN SEARCH OF DARKNESS REVIEW 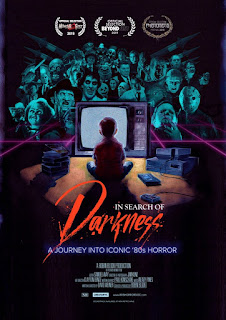 An exploration of ‘80s horror movies through the perspective of the actors, directors, producers and SFX craftspeople who made them, and their impact on contemporary cinema.

Many of us horror fans love ‘80s horror for numerous reasons. To start, many of us grew up in that era, and our first horror movies came during that time. Now almost 40 years later Hollywood has gone back to that time to remake many of our favorite films, or steal some of the ‘80s magic to create new shows. So it seems like the perfect time to bring “In Search of Darkness” to horror fans!
This is one hell of a documentary at just over 4 hours long! Why so long…because it goes year by year instead of just talking about ’80s horror in general. Yes, there’s some talk about the time period in general, but the real work here is done going year by year. They point out many of our favorite movies, and probably some that the audience forgot about.
They bring back all kinds of horror icons to talk about the movies like John Carpenter, Cassandra Peterson, Doug Bradley, Joe Dante, Heather Langenkamp, and Kane Hodder. It’s great to see these stars talk about their films, and add some insight that the audience might not have known. Sometimes it’s about what happened during film, and other times about the effect of the film on horror.
Also, they bring in pop culture icons, and industry experts to add their opinions including Corey Taylor of Slipknot, Joe Bob Briggs, Heather Wixson of Daily Dead, and Michael Gingold formerly of Fangoria. They talk about their reactions to some of the films, and how it effected them during that time period. They take a look at it from a fans’ perspective like you or me. It’s nice to see what they like, and what they were doing during that time.
So what movies are mentioned? It might be easier to talk about what movies are not mentioned. Of course all the big time slasher movies with the Freddy’s, Jason’s, Michael’s, comparing werewolf movies like “The Howling” and “American Werewolf in London,” Stephen King movies, and lots of sequels. It’s crazy how so many movies had sequels and even trilogies during one decade. With all the complaints about remakes/reboots, it’s also amazing to see how many good movies haven’t gotten one yet (and lets keep it that way).
Really, there’s nothing to complain about here other than maybe the 4 hour time span. There’s plenty of insight most likely on some of your favorite movies. It’s great to sit back, watch them talk about it, and reminisce on how you felt watching the movie. It will definitely take you back to one of the best decades of horror, and it’s clear to see why. If anyone wants to know why this decade gets so much attention, just watch this documentary. With that I give it 4 pools of blood, and will look to turn on some ‘80s horror!