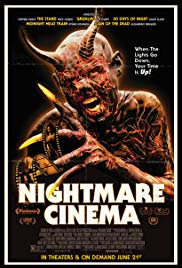 Five strangers converge at a haunted movie theater owned by The Projectionist. Once inside, the audience members witness a series of screenings showing there deepest fears and darkest secrets over five tales.

Less and less people are going to the cinema these days, and opting instead to watch movies on VOD, Netflix, etc. Older theaters are closing up leaving just a shell of themselves behind. One of those theaters seems to be Nightmare Cinema, although it’s still able to pull a few souls thru its doors. Unfortunately for them, there’s still one person working at the theater, who intends on keeping them their forever!
This anthology of horror starts off with ‘The Thing in the Woods.’ It seems very much like the typical slasher kills teens in the woods kind of story. There’s plenty of deaths, including a humorous use of knives in one of them. Just when the audience thinks this will end in the usual way, it throws a fantastic twist at them.
Because of the twist, this short alone makes this anthology worth watching.
There’s still plenty more to like including the next short ‘Mirare.’ A young couple is about to get married, but before they do, the woman sees a plastic surgeon to fix a scar on her face. The surgeon agrees to fix it along with some other minor improvements. While in recovery the woman feels something strange is happening, and by the end the audience will find out just how bad plastic surgery can be.
A Father walks into the theater next meaning the audience is about to get an exorcist film called ‘Mashit.’ The demon does a good job of hiding itself within this religious boarding school until the shit hits the fan. Unexpectedly, the demon possesses all of the children, and they try to kill the Father, and nun. It’s a wild scene with the Father and nun actually killing some of the kids. It continues the dramatics until the end with nothing stopping this demon!
‘This Way to Egress’ is definitely the weirdest of the short films. A woman has completely lost touch with reality while trying to get help. She battles to stay in reality with her two children, but her world is getting darker and dirtier by the minute. Everything she sees, and the conversations she has with people are just strange. She’s told the only way out is suicide, but struggles to make that her true reality.
The final short, ‘Dead,’ is a combination of supernatural and serial killer action. Things go bad during a robbery leaving a boy without his parents, and recovering in the hospital. It’s not really clear to him, but his mother is trying to convince him to come to the other side with her. Yes, the boy can see ghosts in the hospital, which can be a crazy thing. That’s not his only problem, as the guy who robbed his family has come to the hospital to finish him off. It’s interesting to watch him first have the decision to die or not, and then have that decision possibly made by the killer.
“Nightmare Cinema” should go down as another very good anthology. It has a nice variety of stories giving a little something to all kinds of horror fans. There are plenty of things to like about each story, but ‘The Thing in the Woods’ had me sold on this anthology from the start. Mickey Rourke plays the projectionist, who controls the movies, and the people’s fate. He’s doesn’t get a lot of screen time, but is a welcome creepy host in this one. With all that said, I give it 3.5 pools of blood.