LUZ: THE FLOWER OF EVIL REVIEW 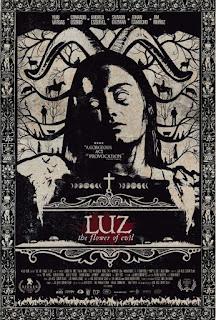 El Señor, the leader of a small cult in the mountains, returns one day to his village with a child who is purported to be the new messiah. But when only pain and destruction befall the community, El Señor finds himself under attack from his own followers, including his three daughters, whose burgeoning femininity has already caused them to question their faith.

“Luz: The Flower of Evil” is one flower you don't want to bloom. El Señor (Conrado Osorio) is in control of a small group of people in the mountains. Unfortunately he has suffered the loss of his wife Luz, and now is left to take care of his daughter and two other young girls. He’s very strict with them, but might be misguided with his thoughts on religion.

As much as he tries to keep the devil away, he seems to always be lurking around. One night El Señor brings home a woman and her young child. Is it to feed them and give them a new home? No, it’s to rape the mother, send her away, and keep her son because El Señor is convinced the boy is Jesus. This is just one of the battles between good and evil that effect the fate of El Señor and the three young girls.

Before getting to the horrors of this film, it’s almost impossible not to talk about the imaginary first. Alone there are great shots of the mountains, waterfalls, trees, and entire area where these people live. To make it even better, it seems they added color, or brought out the color in all these shots. Not often do audiences see such color, especially those who watch horror films that are typically very dark.

And yes, as bright as this film is it also goes extremely dark. The aforementioned rape scene is one of those moments, and is definitely not pleasant to watch. One of the young girls creates an odd moment at night in the forest listening to a cassette. It’s an enlightening moment for her, but leads another girl’s storyline in a frightening direction. El Señor continually tries to keep the devil away, but it seems to become too much for him. He eventually goes to an extreme measure to save the girls, and get rid of the devil. And don’t forget poor ‘Jesus’ locked up in a cage against his will while all this happens.

Being a foreign film it’s hard to judge the complete performances in another language, but it seems like they did an excellent job. Everything starts with El Señor so the pressure is on Conrado. The movie is about the good and bad, and he takes his character perfectly in each direction. The girls played by Yuri Vargas, Sharon Guzman, and Andrea Esquivel do well in playing off of El Señor.

“Luz: The Flower of Evil” shows just how hard it is to escape the devil. El Señor has good intentions, but no matter what he does he seems to make matters worse. The girls are coming of age, and it’s hard to keep them in the dark any longer. They’re also going to make mistakes, which may or may not bring on the devil. However the harder they fight the devil, the more he seems to make his presence known. On the other end of the darkness is the wonderful color the film uses to show there is still good out there. With that said, I give it 3 pools of blood.

More info about this film at: http://promotehorror.com/2020/12/04/luz-the-flower-of-evil-coming-to-shudder-december-21st/