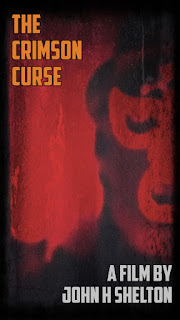 A young man comes into contact with a mysterious internet video sent to him by his friend, Adam. “What’s done, is done… when two men become one!”

“The Crimson Video” is a short film with two main components. One is a young man who is filming a video of himself talking about receiving a video. He received the video from a friend and didn’t think much of it at first. However, after time he tells the audience that things in the video he received have started to become real. He’s basically using the video looking for help, and even leaving a video behind if something happens to him.

The second component is this video that he received. As he talks the audience gets to see the video a couple of times. It’s a man with a mask on laughing and repeating the phrase, “What’s done, is done… when two men become one!” There is a red lighting in the man’s background making it a little more intimidating.

All together “The Crimson Video” seems like it might have been a scene from a bigger film. Obviously the masked man has a story to tell. Who is he, why is he on this video, and why is he taunting the people who watch it? Most importantly what does his phrase mean to those watching? While it leaves the audience with many questions both actors pull of their roles well. The audience can feel the stress the young man is under, and the masked man is creepy enough with his one line. Check it out below and hope the masked man is waiting for you!