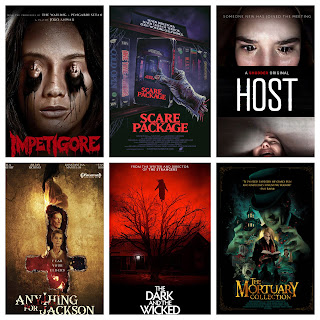 I won’t be the first and probably not the last to proclaim 2020 a dumpster fire of a year. And somewhere in that fire horror movies were able to burn bright! I’m not sure if it has been an amazing year because I got to watch more horror than ever, or that they were just that damn good. So good I’m doing this list a little different this year.

First will come my top 10 films of the year instead of the top 5. I almost made it a top 20, but couldn’t come to an order of films that I was happy with. So instead I’ve broken down some categories to able to mention some films that deserve recognition. And still with the categories I know some films were left out that need to be watched, and I’m sorry to those films.

If you’ve followed me on Twitter and/or the podcast you might have some clues as to the films I’ve really liked. I think I’ve tried to remain consistent starting with my #1 pick, which shouldn’t be a shock, and was the only film this year that I gave 5 pools of blood to. All the other films in my top 10 scored 4 pools of blood or higher for those wondering. #3 might be the biggest surprise to many, but I loved the film when it came out, and couldn’t toss it aside for more talked about films. There might be another surprise pick or two in there, but again I’m loyal to films I like. #10 was a hard one because it came down to “12 Hour Shift,” “Hunter Hunter,” and the winner…

#10: HIS HOUSE This is the only movie on the list I didn’t get a chance to review. Luckily I just recently saw it, and had to add it. The story of refugees gave us something a little different, and a couple to like. There’s a nice twist, but the best part of the film is how creepy it is. It’s those moments in the house that landed this film on the list.

#9: FRIED BARRY This is a title some might not be familiar with, but if you’ve followed the festival scene it’s played at a ton of them. It’s won all kinds of awards, and hopefully will get a bigger release one day. I wasn’t sure what to think of it at first, but the movie just grew on me the more I thought about it. Also, Gary Green puts on one of my favorite performances of the year without saying a whole lot.

#8: HOSTS Yes HOSTS with a S, and maybe another surprise pick. Well if you know me I’m a sucker for blood, guts, and brutality, and this movie definitely scored on all three especially brutality. The dinner scene was one of my favorite scenes of the year, and sets the tone for the rest of this movie. I liked that they never looked back, and weren’t afraid to continue the film down a dark path. It all came together with strong performances including the likes of Nadia Lamin, and Samantha Loxly.

#7: IMPETIGORE Courtesy of one of my new favorite director/writers Joko Anwar. He’s managed to light Indonesian horror films on fire with this one, and other must see films like “Satan’s Slaves,” and “The Queen of Black Magic.” He has a way of giving the audience just enough to keep them around long enough to scare the hell out of them in the end. This one is no exception with a wild story, and very satisfying ending.

#6: HOST A film born in quarantine, and given an extra bonus point or two because of it. Credit to this cast and crew for putting together a great film all with following quarantine guidelines, and filming under much different circumstances. They managed to take some familiar elements from films like “Unfriended,” and “Paranormal Activity,” and refreshed them in their own way. In a new world of Zoom calls, they gave us a reason to hesitate taking our next call.

#5: THE MORTUARY COLLECTION It’s hard to believe I managed to squeeze in two anthologies in my top 5, but it has happened. There’s so much to like about this film starting with Clancy Brown. It was like he was born to play this role, and I’m not the only one who he convinced he could play “The Tall Man” if there ever was a “Phantasm” remake. I particularly liked how each short topped the one before it making it a magical collection of films.

#4: SCARE PACKAGE This is a film that truly had me falling out of my seat laughing. It nails so many horror tropes, and couldn’t have picked a better main story focusing on a video shop. I will admit not ever short film was for me, but overall the ones I did enjoy were enough to carry the whole film over the top. Goo-man is a particular favorite character of mine created by Chris McInroy, who now has several spectacular short films under his belt.

#3: BECKY A surprise pick at a surprise position. Maybe to many, but not to me. I mentioned consistency in the opening, and at a time this year this was my number 1 film. It was great how they took well known actors, and put them in much different roles than audiences usually find them. The perfect example is Kevin James, who plays a bad guy no one will be laughing at. Lulu Wilson is no stranger to horror, but instead of playing a young girl in fear she is a badass girl with some fight in her. Blood, guts, and brutality helped make this film one of my favorites of the year.

#2: ANYTHING FOR JACKSON Another film that I have raved about, and the only one I gave a second thought to possibly taking the top spot from my number 1 pick. Julian Richings and Shelia McCarthy put on some terrific performances being funny at times, and truly evil in other moments. It was hard to know whether to root for or hate their characters, and that was part of what made this film so special. The whole ‘reverse exorcism’ angle gave the story something different, and it only gets better with the truly frightful demons that come alive in the second half of the film.

#1 THE DARK AND THE WICKED “The Strangers” is one of my favorite films, and it’s hard to believe Bryan Bertino could top it. Along came this film, and it blew my mind that he did it again. The performances were top notched, the setting was perfect, and the scares were to die for. The film got under your skin early, and never let you forget it. No time for jokes or comic relief, just time for brother and sister to wonder what to do next. It was dark, it was wicked, and it was with little doubt my #1 pick for this year months ago.

Now for the categories I mentioned at the beginning. Again this is mostly to recognize some other movies I liked and think you should watch if you missed them. They won’t include any of my top 10 films even though some will fit in the categories:

Horror-Comedy: 12 Hour Shift, Scare Me, Uncle Peckerhead, The Wolf of Snow Hollow, and Exorcism at 60,000 Ft

Based on new technology: Spree, Driven, and Come Play

Movie with message/feeling/heart: M.O.M. Mothers of Monsters, Relic, and Tent

Documentary: Leap of Faith: William FriedKin on the Exorcist, and Cursed Films

Featuring a cast of youths: They Reach, and Vampires vs the Bronx

Foreign films: La Llorona, The Platform, Boys from County Hell, and The Columnist

Creepy: The Wretched, The Pale Door, and Death of Me

So there it is…my top films for 2020, and a little more. While I saw a lot there were a few I did miss. There is no right answer here, as everyone likes what they like, and hates what they hate. It’s good to have a place to start a conversation about horror, and these lists do just that. Feel free to disagree with any of my picks, and we can talk about why you went with different films. I do think we can agree horror shined in 2020 even without movies like “Halloween Kills,” “Spiral,” “Candyman,” “The Conjuring 3,” "The Quiet Place 2,” and several others. 2021 has some big shoes to fill and it might take more than these names to do well to accomplish that!