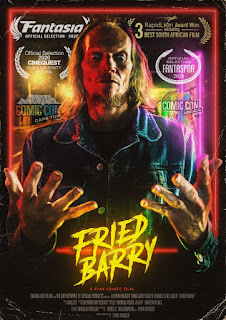 Barry is a drug-addled, abusive bastard who – after yet another bender – is abducted by aliens. Barry takes a backseat as an alien visitor assumes control of his body and takes it for a joyride through Cape Town, South Africa. What follows is an onslaught of drugs, sex and violence as our alien tourist enters the weird and wonderful world of humankind.

Directed and written by: Ryan Kruger

To be honest, movies following characters on drug fueled adventures has never really done it for me. Yes, some of them were well done movies, but they just didn’t do it for me. With that, there was some concern about watching “Fried Barry,” but something told me to do it anyway. After the opening few minutes I was getting that feeling that this movie was going to fall in the same camp, and then everything changed! Barry (Gary Green) got taken by aliens and I must have too because my eyes were glued to this film from that point on.
Before getting to decide whether Barry is going to be a character to like or hate, he’s abducted by aliens. He gets beamed up to their ship, and worked over in all kinds of ways. It’s a crazy scene, but also refreshing to see because they go through this process as opposed to letting the audience guess what’s done to him. Barry’s body is sent back to Earth, and maybe Barry is still in there somewhere, but he’s no longer in control. An alien is controlling him, and takes an unusual tour through the city. 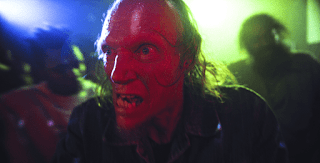 From here on out he doesn’t have a lot to say, but finds himself in plenty of strange circumstances. He enjoys some clubbing, which sets the stage for a great soundtrack that plays throughout different points of the film. In another bizarre moment, Barry gets lucky with a prostitute, but lets say the prostitute isn’t as lucky. No she doesn’t die, but she’ll never forget Barry. Yes, alien Barry does some bad things and continues his drug using ways, but he’s also a better husband and father.
However it’s hard to be nice with so many bad people on the streets. Barry is beat up, and even taken hostage. In his regular life it would probably be hard to think of him as a hero, but he gets to be one a couple of times. It’s fun watching him just take in whatever situation he finds himself in, and just go along with it like in a crazy escape from a mental hospital. And then there are the drug induced moments that take everything to a whole new level. 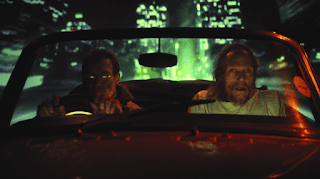 While an alien drives Barry it’s Gary Green’s performance that makes this a joyride. Instead of dialogue, much of his work is done physically. The way he walks almost like a robot, and nothing beats his bulging eyes that seem to never close. He just stays so perfectly in the same motions the entire time, and reactions the same no matter what is going on. The audience can really imagine him being a human being controlled by someone else.
Movies where characters are on a lot of drugs sometimes turn out feeling like the audience has to be on drugs to enjoy it. That was one of my fears going into this film, and I couldn’t be happier that it never felt that way. Instead, it turned out exactly the way it was supposed to. Like the alien, along with the audience, was experiencing a whole new crazy world through Barry’s eyes. The fantastic alien abduction scene is only the start of many bizarre yet fun scenes created on Barry’s time exploring the city. “Fried Barry” really is a wild ride unlike any I believe I’ve come across. With that, I give it 4 pools of blood, and hope an alien never uses me the same way!
HorrO
“Fried Barry” is playing On Demand as part of the Fantasia 2020 Festival.