FANTASIA 2020 REVIEW: BLEED WITH ME 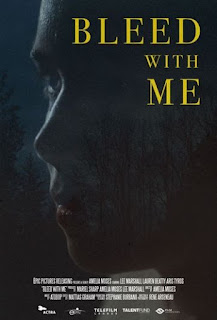 During a winter getaway at an isolated cabin, a self-destructive young woman becomes convinced that her best friend is stealing her blood.

Directed and written by: Amelia Moses

“Bleed with Me” sets up in the very familiar horror setting of a cabin out in the woods, and a group of young people taking time to relax there. Emily (Lauren Beatty) and her boyfriend Brendan (Aris Tyros) have come there after some tough times for Emily, and a chance for them to work on their relationship. However, that becomes a little challenging because Emily has brought along a new friend, Rowan (Lee Marshall). She’s a shy young woman who tries to fit in as a third wheel.
They spend the first night together getting to know each other better, and dropping the first clues of the strangeness that’s coming. Rowan tells an odd story or two before getting drunk and passing out. The next morning things get a little more deadly as they go for a walk, and see something unexpected in the trees. Night comes again, and they continue with some of the strange stories. When they retire for the night, Rowan apparently has a dream that seems very real because it looks like Emily coming in her room. The next morning Brandon notices blood on Rowan’s arm making her wonder if she was really dreaming or not. 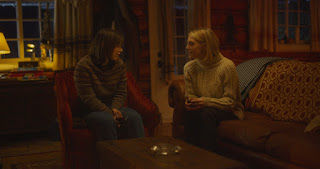 Without a doubt this is a slow burn feature. While at first it seems like Rowan is the third wheel, it’s really Brandon that takes a backseat to these two peculiar ladies. Both have issues, and things from their past that has lead them to this point. It’s all in the eye of the beholder here as far as what the two of them see in the other, and what the audience sees in them. One thing about Emily is how she wants to take care of Rowan no matter what. Is she doing stuff to Rowan that makes her need help? For Rowan, her social awkwardness makes her hard to read at times. She continues to battle with thoughts of Emily taking blood from her, but she’s never sure. Why is she having these dreams, and getting so easily sick?
The movie will force the audience to pay attention to each of them very closely. The back and forth between them makes it hard to truly figure out who is the good guy, and who is the bad guy here. If it’s as simple as yes Emily is taking Rowan’s blood then there’s the answer. However, the way things play out it never appears that simple. The audience is given reasons to distrust both of them, and yet feel sorry for them. Lee and Lauren deserve credit for carefully bringing these characters to life, and not letting their performances reveal what their characters are hiding. 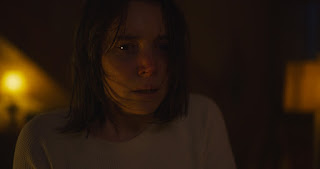 Slow burns aren’t for everyone, but the key is not making it so slow that the audience losses attention. As both ladies reveal more and more about themselves, the most important details are never answered. Both leave tons of questions about themselves unanswered, which might leave the audience stunned in the end. Even the final shot might make the audience pause, and say, “that can’t be all!” Again, that might not sit well with everyone, but it worked for me. The mystery that’s left behind is what made had me stick around for this journey. I might not want to bleed with you, but I’ll give “Bleed with Me” 3 pools of blood!

“Bleed with Me” is playing as part of the Fantasia 2020 Virtual Festival.
Posted by HorrO at 11:20 PM