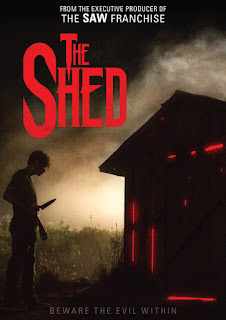 A hunter gets bitten by a vampire and runs into a shed to avoid sunlight. Stan, a 17 y.o. on probation, and his supervisor grandpa live next to it. Stan’s bullied high school buddy can use a monster.

So how harmful could a shed be? Well it could be the source of tools to use against someone, but that might be about it…or not. What if something evil decides to hide in it? That’s where the problem starts in “The Shed.” Oh the horror that is about to come to such a small space!
Instead of hiding what’s in the shed, they show the audience what’s in there, and how it got there right off the bat. A man is out in the woods just before daybreak when he’s bitten by a vampire. Before the vamp can feast the sun comes out to fry it. The man realizes that’s about to happen to him too, but he’s able to make it to the shed for cover. And what happens to a vamp stuck in a shed…it gets hungry. 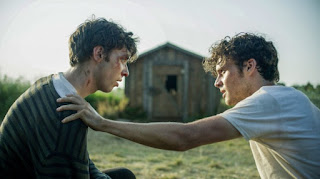 A troubled teen, Stan (Jay Jay Warren), is living in the house next to the shed with his grandpa. His grandpa isn’t the nicest grandpa around to say the least. Stan’s troubles aren’t just at home, but also with the local police, and bullies in school. While he tries to deal with them, he’s about to find more than trouble in the shed.
Stan’s plagued with nightmares before the problems with the shed, and they get even worse for him after he encounters the vamp. The nightmares are a nice touch of scares while the movie builds on the bullying. Yes, in the middle of the darkness, the effects of bullying shines through. Not only Stan, but his friend Dommer, (Cody Kostro) are picked on by Marble (Chris Petrovski) and his friends. 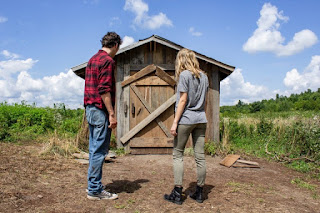 Things come to a head when Dommer gets the opportunity to do away with his tormentor by sending him in the shed. Chaos ensues setting up for a little bit of an unexpected ending. Not going to give anything away, but more classic vampire rules come into play. Speaking of that, there’s one that’s overlooked or I missed it, otherwise it all seems to work out.
Overall, “The Shed” offers a good vampire film set up in a different way. It might have been nice to hide what’s in the shed from the beginning, but then again that might have been too predictable of a way to go. Instead they manage to give the audience their fill of vampire horror, and show what happens to bullies. The story comes together well, and the acting is good enough to pull it off. Best of all, there’s just enough blood and guts spilled to overlook the earlier moments of teen drama. With that said, I give it 3 pools of blood.

More information about the film can be found at: http://promotehorror.com/2020/08/26/the-shed-comes-to-shudder-august-27th/
Posted by HorrO at 9:00 AM