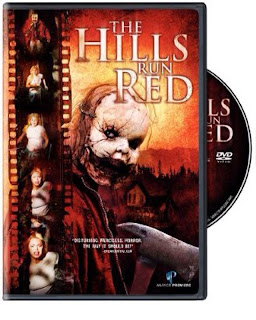 I saw that a lot of people put this movie in their top movies for 2009 lists, so I decided to rent it, and check it out. I didn't really know much about the movie except that people seemed to like it. It was one of those rare times I watched a movie and basically knew nothing about it. I don't think even think I read the back of the DVD box before watching it. While a lot of people may have liked this movie, it really didn't do anything for me.

The story was about Tyler and his search for a movie that disappeared along with the director. It is hard to believe that a movie would disappear, but apparently this one has. Really, that would just tell me that the movie probably wasn't that good, and they only made a few copies. Well, Tyler thought otherwise, and went to extremes to try to find what he thought was one of the best horror movies ever made. While doing his research, he stumbled upon the director's daughter, Alexa. He went to meet her, and convince her to help him find the movie and possibly her father. This was where the extreme part came in, as she led him (along with his girlfriend and best friend) into some woods in the middle of nowhere. That was where they came face to face with Babyface, the serial killer from the movie. Yea, imagine that. In order not to give anything away, let's just say from that point on Tyler probably got closer to finding the movie than he really wanted to be.

So let me discuss Babyface to start. I was a little disappointed that the movie didn't focus on him more. While he was an important character, he really wasn't the focus of the movie. I thought the movie was building to a point where he would become a main player in what was going on, but that never happened. I guess I was looking forward to him coming in and chopping up people, but that never really happened. I loved the mask, and given how Tyler described the movie, I thought we were going to get a lot of good killings by Babyface at some point. To me, we only got to see one really good killing, and it was a flash back that Alexa had. It was about a girl that Babyface hung from trees with hooks in her shoulders, and tied up with barbed wire (I'll leave the rest for your imagination).

One thing that really bothered me was that the movie took too long to really get going. There was too much explaining, and stalling before we really got down to the meat of the movie. Tyler had to do his research, discuss it with his friend, find Alexa, rehab her and convince her to look for the movie, pack up the car, and even document some crazy country people. Oh, and I almost forgot the affair that his friend and girlfriend were having. It was just too much set up with the only thing really keeping you in it was wondering who was watching them the entire time.

The "horror" in this "horror" movie didn't really begin until they made it to the woods. I think I would have liked this movie more if it was based more on what happened from that point on. Of course, they still would have needed to get the characters there, which they could have done in a shorter and simpler way. That would have gotten rid of all the bad acting that was required during the set up. The movie had a few twists and turns from the point they met Babyface in the woods on. Some of the twists were not all that surprising, but I did like the one at the very end of the movie. I didn't see that coming in all the craziness that was going on.

Not knowing much about this movie going in may have set me up for disappointment. As the movie went on, I got the impression we may have seen some good killing by Babyface, but that never really happened. He was not as big of a player in this movie as I thought he was going to be. Actually, he turned out to be a big disappointment to me at the end of the movie. The movie spent too much time setting things up, and forcing their actors to really act, which was not happening. I think they missed out on a chance to expand on some of the ideas they had towards the end of the movie. It would have made it more interesting, and could have made it more twisted. I think it is safe to say this is not making my top horror movies for 2009 list, and I am giving this movie 1.5 pools of blood.