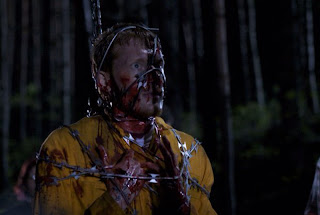 Let me start by saying I am a fan of the Wrong Turn series. I know that when you get to a part three in a series like this it really becomes hard to match the original, and even the sequel. So I had to lower my expectations a little before watching it. With that said, after watching the movie, I still really enjoy this series.

Like the others, this movie took place out in the West Virginia woods. This time a group of prisoners were being transferred when Three Finger ran their bus off the road. Carlo Chavez, the most dangerous prisoner in the group, took control of the survivors. He demanded that Nate, one of the guards, lead the prisoners out of the area since Nate grew up near there. They ran into Alex, a girl who earlier escaped an attack by Three Finger on her friends, and has been hiding in the forest. She told them about Three Finger, and how he will kill them all. Chavez took this as a challenge, and insisted that Alex and Nate lead them out of the forest. He got even more insistent when they stumbled upon an overturned bank truck filled with bags of money. Chavez claimed the money for himself, and demanded that everyone carry the money bags with them. As they tried to make their way out of the woods, Three Finger did his best to stop them. Of course, he was not concerned with the money. He was interested in their flesh.

Being a horror fan, I think one of the most important things to look for in a movie like this are the death scenes. I will admit that not all the death scenes in this movie were all that real, which may have taken something away from them. To me, I let that go this time, and enjoyed them for what they were trying to do. Take two different scenes for example. One being when one of the prisoners accidentally set off one of Three Fingers traps, and got his face sliced off. You see his face slowly just slide off to the floor. It really isn't realistic that it would happen like that, but I applaud them for what they were going for. The other example was one of the deaths at the beginning of the movie. One of the college kids was running away from Three Finger, and stepped on a wire. This set off a device that went right over the kid, and sliced him in three pieces. Again, not very realistic. How many things can really slice you in half like that? It reminded me of part 2 when they sliced the guy in half at the beginning. Both not realistic, but I love what they were trying to do.

Speaking of the scene at the beginning of this movie, I have to say I loved it. The rafting kids came ashore to take a break. One of the couples decided they were going to get busy, and the girl got on top of the guy. She was topless, and he was grabbing one of her breasts when an arrow went right through her breast and his hand. So much for getting freaky! A second arrow went right through her eye. The guy got up, and took off. If that wasn't bad enough, Three Finger came over to the girl, and ate her eye. Three Finger disposed of the guy, and as mentioned above, the other guy was sliced in three pieces. Three Finger also got a taste of him, as he licked the blood from one of the slices. The arrow through the breast thing was great, and I loved how they topped that off with how he came over to eat the eye: violent and disgusting. I take it as a good sign when a horror movie starts off with multiple kills.

I know some people didn't like the story, but it didn't bother me. It gave a reason to get several people in the woods to be killed. The acting didn't bother me either. One thing I found interesting was the comparison between Chavez and Three Finger. Both were violent characters, and made people fear them. Of course, they had their differences. One was a mobster obsessed with money and power, and the other was a crazy mutated cannibal just looking for his next meal. Chavez was the dominant figure in the group of survivors, but Three Finger was the dominant figure of the forest. I liked how the movie set up for these two dominant figures to eventually go head-to-head at the end. While I liked how they set it up, I have to say I was a little disappointed with the fight, and the way it ended. I was hoping for something a little better.

I took this movie for what it was, the third part in a series. I didn't have any great expectations, but I ended up enjoying this movie. Even though some death scenes weren't that realistic, and could have been executed better, I still appreciated what they were trying to do. I like the violence of this movie, and the touch of disgusting. The movie led to a big showdown of two characters that deserved the punishment they gave each other, but it was a little disappointing. I especially liked the little twist at the end of the movie, and I would definitely welcome a part 4. I give this movie 3 pools of blood.