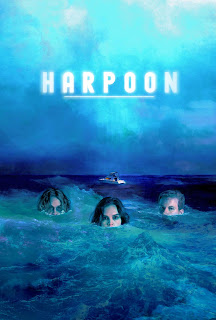 Rivalries, dark secrets, and sexual tension emerge when three best friends find themselves stranded on a yacht in the middle of the ocean desperate for survival.

“Harpoon” sounds like a great name for a movie at sea featuring a great white, killer whale, or some kind of sea monster. However, none of the above are in this movie, and there’s really only one fish to be found. Instead of being the instrument that slays the beast, it’s the item that helps start destruction of this friendship. Richard (Christopher Gray) thinks his friend Jonah (Munro Chambers) is sleeping with his girlfriend Sasha (Emily Tyra), but it turns out that all the secrecy is how they got him a harpoon for his birthday. They take the hostility of this moment onto Richard’s boat for a wild adventure at sea.
Once the trio hits the open water it’s up to them to entertain the audience with their drama, humor, stupidity, and soon enough horrific moments. The mix of personalities really works here, and almost makes it surprising they lasted this long as friends. Richard is a hot head rich guy, who also suffers from a little paranoia. His girlfriend Sasha has a sneaky wisdom about herself, but she also knows her limits. And then there is Jonah, who is sure the world is out to get him because he can’t catch a break.
The first couple of scenes on the boat are pretty hilarious, as Jonah and Sasha want a chance to hit Richard as pay back for what he did before they got on the boat. This becomes the first of several funny negotiations between the trio. It definitely shows a lack of trust between them, which becomes validated real quick. A secret is revealed, arguing ensues, the harpoon is used, and one person eventually ends up in the water. Again some negotiating leads to the person getting back on the boat, but it’s a sinking ship for them all from here on out.
The boat won’t start, and a serious lack of supplies and food wears on the three of them. The longer it goes the worse it gets. They have a couple of more funny moments, but secrets and jealousy leak out the more the conversation continues. One of them is injured, which brings the horror into this equation. This becomes a bigger and bigger problem setting them up to draw straws on who they will kill to eat. Like everything else, this doesn’t go as planned, and a shocking turn of events happens. Just when the audience thought everything was so simple, there’s a nice twist in the story.
“Harpoon” isn’t a tale of how to kill a sea monster. In this movie, think of it more as the three characters shooting harpoons armed with secrets at each other. Some hurt more than others, and everyone gets to shoot at least one. The wounds pile up until it all comes to a head. The trio could barely be called friends when they got on the boat, but definitely can’t in the end. The acting is on point, and all three of them play off of each other so well. The way everything sets up is great, and it’s topped off with a terrific twist. And that's not even getting to the narrating! With that, I’ll shoot my harpoon (speargun) off to reveal a rating of 4 pools of blood!