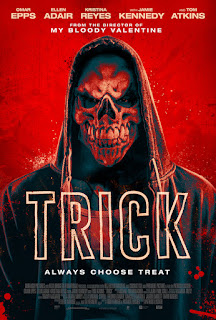 On Halloween night in 2015, Patrick “Trick” Weaver massacred his classmates at a costume party. After being arrested, he managed to escape police custody, but not before being shot five times by Detective Mike Denver. Everyone believes Trick must be dead, but when a masked killer reappears the following Halloween after that, they realize the nightmare is not over. With Trick wreaking havoc and killing innocent people increasingly terrifying ways, Denver will stop at nothing to finish what he started and bring the carnage to an end.

“Trick” gets off to a great start, and keeps rolling from there. It starts in 2015 at a Halloween party where some high school students are playing a game of spin the knife. Everyone is having fun until it’s a boy named Trick’s turn. He spins the knife, but instead of kissing someone he starts his murder spree by stabbing them. He takes down several kids before they’re able to stop him, at least for the time being. The beginning seems to start off in a typical fashion, but then it takes off on its own.
Police detective Mike Denver (Omar Epps) begins his interrogation of Trick at the hospital, but he unexpectedly makes an escape. They think they’ve killed him, but with no body to be found they aren’t sure. It isn’t a big deal until there are similar style killings on the following Halloween. Mike insists that it’s Trick, but the police sheriff doesn’t seem as convinced. The killings continue to happen year after year until everyone is convinced that this is Trick’s doing. They begin to question whether he’s real, or supernatural because they can’t get a handle on how this keeps happening.
While Mike is on the case, so is the audience, but it’s hard not to get wrapped up in all the killing. There’s a lot of killing…a lot, and there will be no complaints about that! From the start, Trick slices and dices his way through everyone in his path. The audience will really feel the way he’s cutting up his victims because all of the action scenes are done so well. Too top it off, he starts with an awesome mask, and also has face paint on.
The police are frustrated with how he’s always a step ahead, and that will definitely have the audience wondering what’s going on as well. The secret is well hidden, but some of the audience might catch on. The reveal is still pretty good, as they flashback showing the audience what they might have missed. All the clues are there, and they seem to line up well. There’s even one more reveal that hopefully leads to a sequel.
“Trick” is certainly a treat if you’re looking for something new to watch this Halloween season. Trick grows his legend with death after death after death! He’s like a magician with his knife, and makes a glorious bloody mess along the way. Yes, there’s some police detective work to sit through, but it’s not too painful thanks to Trick. If you like reveals like in “Saw,” then you should enjoy this one. It wasn’t long before I was hoping for a sequel, so with that I give it 3 pools of blood.