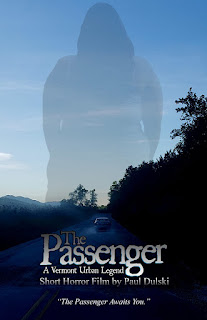 A skeptic of the paranormal picks up a hitchhiker on a desolate road. We’ve heard the lore but did we miss more of the story?

Written and directed by: Paul Dulski

This short film opens with a driver (Jeremy Pratico) heading down a road listening to a radio show. The show is describing an urban legend, which the film flashes back to. The audience gets to see a couple in an argument about the guy’s (Jason Lorefice) mistress (Tessa Baker). When she makes an appearance, his wife (Flora Davia) forces his hand, and he kills and leaves the mistress in the swamp. The driver continues on his way, laughing at the rest of the urban legend, and its rules. Maybe he should have paid attention because he soon becomes part of the story when he picks up a hitchhiker.
The first thing that stands out is the use of color. Writer and director Paul Dulski doesn’t shy away from it in his first film. It goes over real well in the flashback, and makes the best of it just as things get crazy later in the car. He shows a good eye for the regular shots as well, seemingly picking the right time and angles to get his daytime shots done. Being a short film on a limited budget, he makes creative use of how to get the story and rules of the legend in on the radio. He could have just jumped right into weird things happening on a highway like in other shorts, but took the time to get everything in there.
Just like with many shorts, the acting could’ve been better, but it didn’t hurt the film. They actually do a good job with facial expressions, and their best work when times get tough for their characters. It’s not an overly bloody film, but there is some along with some good screams. What’s most important is following the legend, and it appears they do it in “The Passenger: A Vermont Urban Legend.” Overall, it’s a solid start for Paul and his team. They already have some more films in the works, and it will only get better from here.