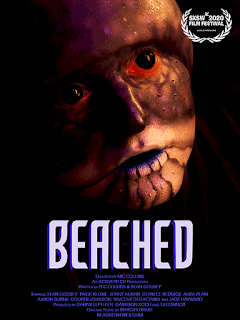 ‘Beached’ follows The Wail, an ancient creature from the deep, who has come to the surface to take away humanity’s pain.

‘Beached’ was scheduled to premiere at SXSW, but unfortunately the festival was canceled due to COVID-19. While fans will have to wait to see the first 3 episodes of the series, I luckily got a chance to check out it out. I say 'luckily' because I really enjoyed it. As a matter of fact, I now can’t wait to see more from ‘The Wail!’
At first glance, the Wail is all kinds of creepy, and weird, but it turns out you can’t judge a book by its cover. The Wail couldn’t be any nicer, and only wants to do good for humanity. That’s really what episode one is all about. Paige discovers the Wail, and to the surprise of her girlfriend has brought him home. It’s an awkward situation that almost becomes disastrous if not for the world’s new superhero!
Episode two is set as another example of the Wail’s role as a hero, and the way in which he can help. Then episode three really digs in and opens a whole new universe. There’s a reporter who’s researching both good and bad stories about the Wail, and the audience is in store for several surprises! More characters, and storylines emerge as it concludes.
The Wail might be one of the most unusual looking superheroes ever! He’s almost a mix between human and whale, but his intentions are only for the good. They do a great job of setting this story up, and leaving the audience with plenty to look forward to. With ‘Beached’ being a series centered around a character looking to bring back hope to humanity, it’s odd how its premiere got pushed back due to this serious virus. There might not be a better time for the Wail to be unleashed on audiences. There’s not doubt that there’s a much bigger story coming in the future, so when this is finally released the Wail has given me hope fans will jump on 'Beached.'