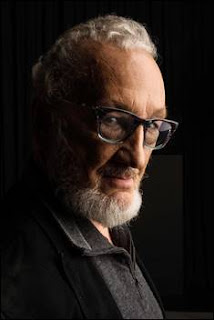 Horror movie icon Robert Englund journeys into the darkest corners of America’s past to uncover stories that are as terrifying as they are real.

As horror fans, how could we not be excited to see Robert Englund on screen? No it’s not Freddy, but come on you can always imagine him talking to you as Freddy. Anyways, while it’s good to see him on T.V., this series has more to do with the tales he’s telling. Kind of think of it as him hosting a show like ‘Unsolved Mysteries,’ or even ‘Dateline.’
He does an introduction, and then dives into a story. While he starts the story, they also have experts come in, and make comments on what’s happening. It takes a little of the pressure off of him, and tries to make the story feel a little more real. So how real are the stories?
Well, supposedly these stories originate from real stories in American history. Call it more like yellow journalism, as some of these stories are clearly fake. They are fake because some of the stories involve flying creatures (dragons), and Bigfoot. Depending on your view of the paranormal, those stories might seem a little more real.
Probably one of the better stories, partly cause it comes close to being believable, is a story about a man with smallpox. They think he’s dead, so he’s put in a coffin to be taken to the graveyard. However, he’s just alive enough to make some noise, and get the attention of a lady who makes it her business to see he doesn’t get buried alive. The believability of this kind of story really makes it frighting.
Another story that turns out really weird is about a sheepherder whose wife is killed. He goes on the hunt for a creature that he hears all kinds of stories about. No spoilers here as he eventually finds something very odd! One more story of note is about a medicine man that searches out evil spirits. Apparently this creature takes human form, and the medicine man is skilled at picking it out, and killing it. Again, this one ends on a very interesting note.
Overall the stories are entertaining enough. It’s nice to see a mix of horror and America history. They have something for all kinds of fans from monsters to the paranormal, urban legends to the just plain old strange! Again some are clearly fake, but others might give you something to think about. If anything, just sit back and enjoy Freddy, I mean Robert, take you on an unique journey through American history. With that, I give season one 3 pools of blood!
HorrO