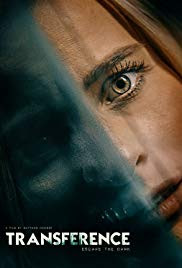 Joshua must protect his twin-sister, Emma, who possesses supernatural abilities and keep her safe from an unstoppable secret agent hunting them for an experiment in a classified government program.

“Transference” opens with a really horrific scene in a hospital. Yes, it takes a few minutes to set up and ultimately is a dream, but sets off the movie on a high note. Unfortunately, that’s much of the horror in the movie for awhile. Instead this becomes a sci-fi type movie. So what does that mean is in store for the audience from here on out?
Lots of confusion especially if the audience has no idea what this movie is about going into it. The audience gets that Joshua (Jeremy Ninaber) is trying to cure his sister, Emma (Melissa Joy Boerger), but what’s wrong with her? They leave a lot of mystery to that until the ending. Of course they can’t give that away early on, but maybe they should have given a few more clues earlier on. The movie is filled with too much of Joshua’s desperation to save his sister. It’s great to worry about family, but it’s a little overboard.
What really adds to the confusion are the flashbacks/dream sequences that keep popping up. Some are random while others build on top of each other. One set of flashbacks involves showing how Joshua is an underground fighter, and that’s how he makes his money. Another set of them, which are the best ones, involve a mystery man in a helmet. Apparently he’s stalking Joshua in search of his sister. It seems he’s the best tip off at what’s going on because he seems to have some kind of strength that isn’t natural.
It really isn’t until the final act that the film takes off because the confusion ends. Now the audience finds out what the story is with Emma, and it explains some of the flashbacks. It turns out that the film is very much like a superhero film just one that takes a long time revealing the heroes powers. Also, that means it ends with a battle of good and evil.
In the end, “Transference” is actually a good story, but just might not have been told in the right way. There are too many flashbacks instead of just straight story. When the story is told, it has a lot to do with Joshua’s need to protect his sister. They should have let the characters develop a little more in real time instead of jumping around. Regardless, the ending does answer many questions, and leaves the movie on an exciting note. Whether it will confuse audiences, or just me, I give movie 2 pools of blood.