MY DEAD ONES REVIEW 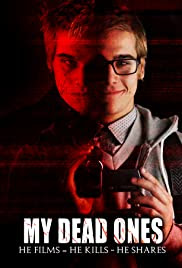 Behind the looks of a shy film student, David hides an obscure past that is about to be revealed.

“My Dead Ones” seems like a curious name for a film, but makes a lot more sense once this one ends. David (Nicolas Prattes) might seem a little odd at first, but that’s just because he’s a little shy. He has some friends, but he’s more interested in his films. It appears he likes to be filming from the shadows, and capturing his subjects in their natural environment. At least that what happens at first.

With his awkwardness, he will draw the audience on his side early. They will feel sorry for him when they see him get picked on at school, and have his camera damaged on purpose. However, as the audience gets to spend more time with David, they’re going to realize there is nothing to feel sorry for. Some think the quiet ones sometimes become the dangerous ones, and David lives up to that.

If the audience likes a film about how someone becomes a serial killer than this might be a film for them. It follows David as he just seems to be interested in filming different people. However, each person he begins following and filming becomes a potential victim of his. It starts kind of surprisingly with an elderly lady, who might have had issues of her own. While that seems like a little bit of a random kill to start with, it will soon enough make more sense as the story goes on.

David goes from a shy young man to a daring stalker and killer. He spends more time getting close to his victims before going for the kill. In one of the more exciting kills, he goes after a father and daughter. He seems to get out some anger or frustration in this kill. Also, he’s sure to record the kills, and load them on the internet. He doesn’t seem overly concerned with police investigating these murders because he has a growing confidence as the movie goes on.

On the surface this might be what audiences expect from a serial killer. However there’s something else going on here, and a bigger reason to why he’s killing certain people. No spoilers here, but it definitely adds an intriguing angle to his story. It does get a little confusing towards the end, as his reality seems to be very blurred. However, he still manages one more surprise before this one ends.

The original title for this movie was “David’s Secret.” He definitely has a big secret, and maybe even a few smaller ones connected to that secret. However, the title “My Dead Ones” makes this seem a little more interesting. Once the audience gets to know David, and see what he’s up to it will all make more sense. Like most serial killers, they will see what’s going on in his twisted head. It gets a little crazy towards the end, but be ready for another good surprise or two. If you like movies that follow serial killers, then this new Brazilian film might be for you. With that, I give it 3 pools of blood.