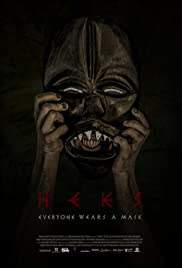 Directed and written by: Reine Swart

“The Heks” might be on me if this movie doesn’t receive enough pools of blood! Dilanne (Coco Lloyd) is doing what many of us do these days. She's talking to her mom on a video chat when someone appears, and murders her mother. Dilanne is upset, and wants answers to why this happened. She can’t wait, and flies home to South Africa to start an investigation of her own.

Usually this would be a good time to get reacquainted with family and friends, but Dilanne didn’t come home for a visit. She digs into her mom’s things looking for clues to why she was killed. Things get interesting when she finds an unusual looking mask. Throw in a witch doctor and things get cooking.

At times it might seem a little slow when Dilanne is investigating, but the movie keeps the audience on its toes with some scares. Actually it does a pretty job with the scares coming in nightmares, and hallucinations. Sometimes its creepy, and other times it’s with the intent to scare. Definitely be on alert because they will be trying the best to surprise the audience, and not every scare is saved for Dilanne.

Audiences might think they know this story, but being in South Africa gives it a refreshing feel. They construct a story where the audience will have to pick up on some different folklore. Obviously the creepy looking masks are a starting point, and the music during some scares echoes that. They also create a mysterious atmosphere around Dilanne that never leaves her upon her arrival. Oh, and don't forget the witch doctor.

“The Heks” seems like a familiar story, but has its own feeling to it. It starts with being in South Africa, and following some folklore that might be new to some audiences. If the audience gets a little lost in Dilanne’s investigation that’s alright because the scares are headed their way. There’s a good mix of jump scares, and plain old creepy moments to keep them on edge. It all comes down to a very wild ending. With that said, please don’t put a curse on me if I give it 3 pools of blood.