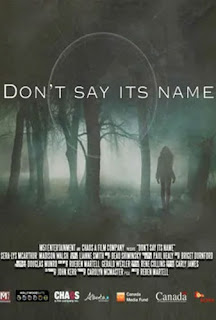 The small, snow-covered Indigenous community is about to see an upturn. Mining company WEC has just made an agreement for drilling on this tribal land, and it’s looking like everyone will benefit – except the land itself. Local activist Kharis Redwater is one of those protesting the deal when her voice is silenced in a hit-and-run that remains unsolved. So as WEC begins their assault on the land, the land itself retaliates against WEC and all those who support it. But for local peace officer Mary Stonechild (Madison Walsh) and Park Ranger Stacey Cole (Sera-Lys McArthur), the answer to this mystery lies in the traditions of their people and the vengeance-filled spirits that have haunted the land for generations, about which the people know one rule: don’t say its name.

“Don’t Say Its Name” unless you want something bad to happen. Something bad happens right at the start of this one, as a local activist Kharis Redwater dies in a hit-and-run. Before her death she was protesting against a mining company, WEC, being able to drill on tribal land. Was her death just a sad tragedy, or was there someone out to silence her?

That’s one of the questions that local peace officer Mary Stonechild (Madison Walsh) and Park Ranger Stacey Cole (Sera-Lys McArthur) have to figure out. That seems like a common enough case except for the fact that more bodies are starting to fall. There seems to be a pattern to them with witnesses not really able to identify what is doing the killing. They might have to look beyond a regular police investigation, and more into local traditions to solve this case! 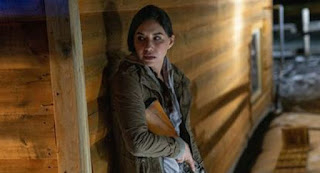 The film isn’t going to waste too much time before giving horror fans what they want. There are a couple of really good death scenes that will be bloody, and mysterious. The killer will swoop in for the kill out of nowhere leaving witnesses and the audience to wonder what just did that. Some of that effect is wiped away once everyone knows who the killer is later on, but it still manages a decent level of creepiness. It also must be noted that blood always looks a little better on snow, and there’s no exception to that here.

As for the mystery, it’s an interesting story to follow. A story that’s going to be about the mining company coming on tribal land, and something not being happy about it. Mary and Stacey might not mix perfectly and have different life experiences, but they each bring something important to solving this case. They will need to solve it quickly, as people are dropping and this killer is moving in on people closer to them personally. It sets up for a pretty exciting end that comes to a conclusion not with police work, but some local traditions.

Many fans recently enjoyed “Blood Quantum,” which was done largely with an Indigenous cast and crew, and looked forwarded to seeing what another Indigenous cast and crew could do. Just like “Blood Quantum,” touching on social injustices, environmental issues, and traditions were important themes to include. They used them to help build an interesting story without feeling forced on the audience. The killing starts off nice and bloody before the film dives more into solving a mystery. Madison and Sera-Lys become standouts as their characters work to put an end to the killing. With that, I have a feeling more and more fans will be talking about “Don’t Say Its Name” so I give it 3 pools of blood!

“Don’t Say Its Name” played as part of the 2021 Fantasia Film Festival.