POPCORN FRIGHTS REVIEW: WE NEED TO DO SOMETHING 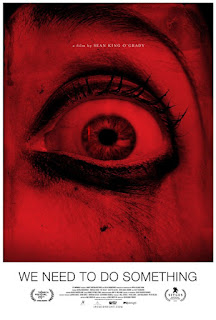 After Melissa and her family seek shelter from a storm, they become trapped. With no sign of rescue, Melissa comes to realize that she and her girlfriend Amy might have something to do with the horrors that threaten her family.

How many horror movies come to that part when a character says, “We Need To Do Something?” A big storm has hit, and forced a family to hunker down in one of their bathrooms for safety. Parents Diane (Vinessa Shaw) and Robert (Pat Healy) figured that was the best place to be with their teen daughter Melissa (Sierra McCormick), and young son Bobby (John James Cronin). In a way it turns out to be a good decision because a tree comes down onto the house destroying part of it. The family is safe except for one thing.

The tree has blocked the bathroom door, and left them stranded in there. For a strong family unit this might be a hard enough task to overcome, but this family has issues to begin with. Robert has a drinking problem, and it appears Diane might have already moved on. This is news Melissa, which she might have noticed if she wasn’t wrapped up in her own drama. The only innocent one here is Bobby, who is just a kid caught in the middle of this mess. Maybe hiding in the bathroom wasn't a good idea after all! 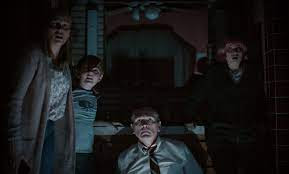 It’s almost hard to believe a movie that’s shot primarily in a bathroom could do so well at keeping the audience’s attention. Early on it’s about learning a little something about each of these family members. Also, it doesn’t ignore the obvious humorous moments this situation creates like using the toilet, and having to shower. Just as the audience might wonder what else is this going to offer besides a trapped family, the movie is going to hit the audience with a thrilling, yet bizarre scene. There’s something else happening here but what?

The answer may be with Melissa, and the only scenes that the audience sees outside of the bathroom. Part of Melissa’s time in the bathroom is revisiting her relationship with Amy (Lisette Alexis). The two hit it off, but as they got closer they felt bullied by another boy in school. With Melissa by her side, Amy dealt with the problem with a spell. Apparently things didn’t go right, and now she wonders if the spell could have done something to the world outside the bathroom. She battles this guilt, as her family battles each other. Those funny moments early on will be well gone in the end, and both the family and the audience will want nothing more than to know what’s happening on the other side of the door. 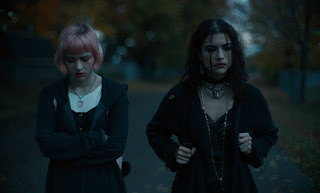 “We Need To Do Something” accomplishes a lot in one bathroom. It first shows a family unit that might be recognizable to many out there. One that spends more time with their phones than each other, and presents common issues like drinking and cheating. And just before it becomes a study on families the true horror is unleashed in a truly unexpected scene. One that lets the audience and family know anything can be outside of that bathroom. As the drama for the family builds so will the audience’s need to know what the hell is going on. There’s several possibilities, and it’s how much that’s revealed or not that might be the ultimate deciding factor in rating the movie. With that, I give it 3.5 pools of blood.

“We Need To Do Something” played as part of the 2021 Popcorn Frights Film Festival.