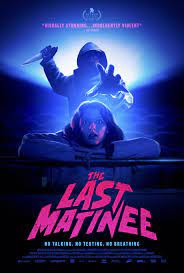 It's a soaking wet day with rain pouring down and one of the best things to do is to go seek refuge in a great old cinema. There’s just one problem: a murderer is on the loose and he also has take refuge there.

“The Last Matinee” gives movie goers another reason to stay home, and stream their next film! It’s raining outside and a few people have made their way into the theater for a special screening. Of course there’s some teens, a couple on a date, a young boy who shouldn’t be there, and a strange old man. With a small crowd comes a very small crew, which is made up of Ana (Luciana Grasso) who is handling basically everything. Typically she could handle it, but this isn’t going to be a typical night.

As the movie begins, the teens try to get settled but can’t do so quietly. This upsets the strange man, but being teens they pretty much ignore him. The couple is getting comfortable in their seats, and with each other. This is all while the young boy tries to remain hidden from the others, and able to watch a film without getting thrown out. Staying hidden or getting thrown out might be the best ideas of any of them because a killer has just entered the theater! 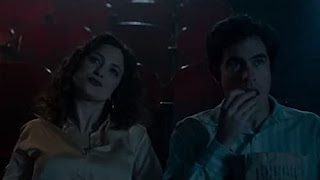 The early part of the film is spent getting its characters to their seats. As far as the characters go, the film definitely takes a less is more approach with them. The audience won’t learn much about any of them before the killer strikes. There’s some conversation amongst the teens and the couple, but not enough to get to know them. Ana spends much of the early part of the film alone once her father leaves so not much is known about her either. The audience will only get to know a little more about those who survive the killer’s initial wave of deaths.

And what fun the audience will have with those death scenes if they like them simple yet brutal. The killer mostly uses a knife, but they make good use of it. The killer makes smoke come out of a new place for one person, and takes time to bond some young kissers together. This is all good, but the killer has a eye for something else. Something very important for watching a movie with, and that can be held in a jar. In one of the most brutal parts of the movie, he’s even willing to give a donation of his own. 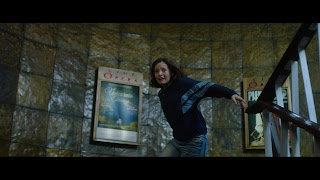 If horror fans are looking for a simple slasher film that takes place in a theater then look no further than “The Last Matinee.” There won’t be wasted time on building characters, or learning about dark secrets of the killer’s past. The characters will be put in place, and then the fun will begin. It will be creepy for the audience to know a killer is lurking around the theater before the characters figure it out. By then, the audience will enjoy some gruesome deaths before a wild and exciting final act unfolds. With that, I hope you have your eyes on this one as I give it 3.5 pools of blood.

“The Last Matinee” played as part of the 2021 Popcorn Frights Film Festival.