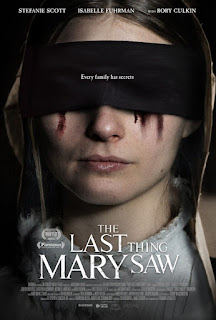 Winter, 1843. A young woman is under investigation following the mysterious death of her family’s matriarch. Her recollection of the events sheds new light on the ageless forces behind the tragedy.

Directed and written by: Edoardo Vitaletti

“The Last Thing Mary Saw” is what everyone wants to know. This film opens in an unsettling situation, and leaves the audience feeling that uneasy the entire way. Mary (Stefanie Scott) begins the film with her eye sockets blindfolded, and little proof she can see. A group of very unhappy people want to know what has happened, and it looks like it’s Mary’s story to tell. No doubt, this isn’t looking great for her.

Mary seems like the typical young lady of the 1840’s. She comes from a family of money, but is low in the family structure. She tries to go along with her family duties, and sticks to religion like her family would want as much as possible. However, she’s developed a more than just friendly relationship with her maid Eleanor (Isabelle Fuhrman). This causes some friction in the family, and plays a big role in what everyone ultimate happens to the family and Mary. 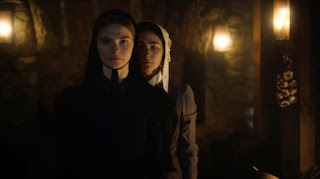 This film is definitely a lot about the atmosphere it creates. It shows right off the bat that something really bad has happened to Mary, but she might not be out of the woods yet. It then slowly introduces the audience to Mary and her family situation. It might be much of what they expect until the relationship with Eleanor comes up. This opens the doors to the possibilities of where this is going along with the religious undertones. But the audience is going to have to wait and see.

They keep the film really dark with just a lot of candles and lanterns, which keeps the mood. It’s perfect having that feeling that evil is playing somewhere in all that darkness. Again, the audience may want to root for Mary and Eleanor as this unfolds, but to bad they already know something bad is going to happen. The film takes its time, but it will eventually lead to a scene that unleashes the evil same pace of the feel of the film. The audience will get to feel the dread and pain that Mary goes through, and finally how she ended up in her situation. 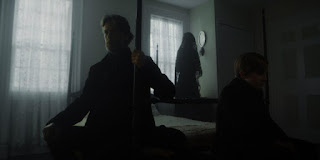 “The Last Thing Mary Saw” is definitely for horror fans that like religious themes, and settings back in the day. Also for those who like a slow burn pace. With all that, the best thing this film does is put Mary in a bad situation to start, and make the audience wait patiently to find out how she got there. It keeps things dark, moody, and leaves the audience knowing things aren’t like going to end well. It then needs a scene to complete the sense of doom it has created to finish things off, and they create the perfect one. With that, I give it 3 pools of blood!