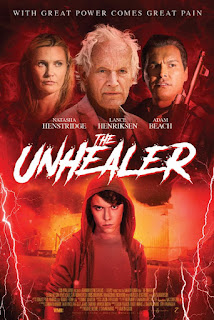 A botched faith healing bestows supernatural Shaman powers on a bullied teenager. When his lifelong tormentors pull a prank that kills someone he loves, he uses his powers for revenge and goes on a bloody rampage to settle the score.

Think of “The Unhealer” as the doctor you don’t want. Pflueger (Lance Henriksen) falls into the power to heal people after a visit to an Indian burial ground. As he travels through town, he convinces people he can heal them while making some money to do so of course. Bernice (Natasha Henstridge) sees him perform, and asks him to come help her son Kelly (Elijah Nelson). Kelly suffers from an eating disorder, and a very strange one causing him to eat things other than food.

Kelly also has another issue which involves bullies. A few of the jocks have found his eating habits odd as well, and use that as permission to bully him. A childhood friend and crush Dominique (Kayla Carlson) tries her best to protect him, but boys will be boys. When Pflueger finally comes to see Kelly he does more than cure him. He somehow transfers his healing power to Kelly curing his eating disorder, and giving a surprising new way to battle his bullies.

First and foremost this is easily a story about bulling and what happens when it goes too far. Kelly suffered and became way overjoyed when he found abilities to fight back with. While it’s good to stand up for yourself, his back and forth with the bullies eventually leads to some deaths. Bulling has definitely gone too far at this point, but makes for some good horror here. There’s a nice little trick with Kelly’s power that he takes full advantage of to get back at his bullies.

What also works is the rollercoaster of emotions the audience might feel for Kelly. It’s easy to root for him when he gets bullied, and even more when he turns it around on the bullies. However, how much will the audience continue to like him when he basically becomes the bully. And then he’s given an even bigger reason to get revenge on the bullies, but does it make it right? Will Kelly ever go too far in the audience’s minds, or are the bullies always far game?

“The Unhealer” is clearly a story about bullying and revenge. Kelly is picked on, but then given almost a superpower to fight back. It seems like the typical fighting between the bullies and their victim until it goes too far for both sides. That is when horror fans get to enjoy fighting, and some nice tricks that Kelly is able to do. As the deaths set in the audience will have to decide which side has gone too far. It's also good to see some familiar faces working well with some new ones. With that, I give it 2.5 pools of blood.