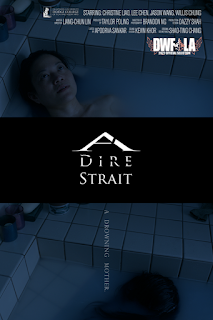 Demi has stayed in bed for weeks due to the Chinese postpartum tradition. Although she tries to be as cooperative as possible, the weeks-long confinement and endless chicken soup push her to her limit.

Directed and written by: Liang-Chun Lin

This might not be a “A Dire Strait” for some, but it is for Demi. She has recently given birth, but instead of getting to enjoy motherhood she’s confined to her room. Demi does what she’s supposed to like rest in bed, and eat soup that her mother continues to feed her. Her mom insists that she watch what she eats, and rests in order for Demi to take care of her newborn.

What mom doesn't know is that Demi might not be doing what she’s supposed to be doing after all! She’s having fast food delivered to her window, and roaming the house when no ones there. As things come to a head between mother and daughter, some strange things start to happen to Demi’s stomach. Sides are drawn within the family, but what will all this do to mom and her baby in the end?

Postpartum must be a hard thing for many women to deal with, and even harder in some cultures that put unnecessary stress on new mothers. This short horror film picks up on that stress, and shows Demi’s struggle to stick with tradition. A tradition that has her eating some unappetizing looking soup, and some strange things happening to her stomach. The true horror here is the situation, and the divide it has on the family. “A Dire Strait” gives the audience just enough drama, laughs, and horror while bringing light to an important issue.