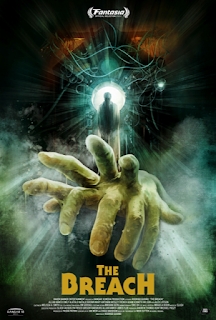 Counting down his last days as Chief of Police in the tiny town of Lone Crow, John Hawkins must investigate one last case when a mangled body with uncanny wounds washes up on the shores of the Porcupine River.

“The Breach” is about to open the door to hell on a small quiet town. Families are headed to the lake to enjoy a nice sunny day. Everyone is settled in, and ready to hit the water. Too bad a dead body is about to ruin their fun. John Hawkins (Allan Hawco), the police chief, takes the call, and heads down there to see what’s going on. He thinks this is bad, but he hasn’t seen anything yet.

Something really strange has happened to the body, who is identified as physicist Cole Parsons (Adam Kenneth Wilson). In order to figure out what happened to Cole, John decides to pay a visit to his house in the middle of nowhere. Unfortunately he has to take his ex Meg (Emily Alatlo) with him because she knows the best way to get there. And tagging along is her ex Jacob (Wesley French), which is about to make this an awkward trip through the woods. The tension between the three is nothing compared to what’s waiting for them!

The film hits play again on the horror button, and does it in a big way. They’ve tried hard to solve this mystery, but maybe they should’ve left this case unsolved. The breach is open and dozens of creatures are unleashed. The special effects really get a chance to shine in the midst of a wild ending.

“The Breach” is a lot about the mystery that John has to solve. It takes its time giving the audience and characters a few clues here and there. It will be weird and creepy in the house, and the film might even test the patience of some horror fans. However, those with patience will be rewarded with some great creatures and special effects in the final act. It will just make some wish they did more sooner! Regardless, I still give it 3 pools of blood!