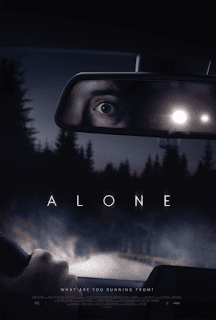 A recently widowed traveler is kidnapped by a cold blooded killer, only to escape into the wilderness where she is forced to battle against the elements as her pursuer closes in on her.

Being alone might be the objective in “Alone,” but it proves to be harder than one might expect. Jessica (Jules Willcox) loads her car with U-Haul attached, and heads out on the road. Her mind appears to be on something as she makes her way up into the mountains. She comes up on a slow car, and makes a daring attempt to pass it on this winding road. The other driver doesn’t make it easy, and almost causes a huge accident. The next day the man (Marc Menchaca) finds a rattled Jessica, and apologizes for the incident.
That’s only the first of several run ins with the man on the road. With each meeting, Jessica becomes more scared of him, and her fears eventually come to life. He takes her hostage in his cabin, and doesn’t have good intentions for her. While there he finds out what she might be running from, but she also finds out something interesting about him. She doesn’t stay locked up for long, as she escapes, and finds herself now running from him. 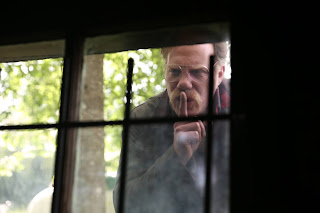 The most important thing to notice about this film is how real it seems. Jessica could be any woman out there, and probably the scariest thing about the man is that he could be any man out there as well. Early on Jessica is put in a tough situation having to acknowledge this guy while not being sure what he’s up to. Is he genuinely sorry for what he did, or does he have other motives? Then she’s put in a situation where he needs help, but she just can’t do it. She has to weight insulting a possibly good guy and leaving him stranded on the road versus her fears that he could be out to hurt her.
From early real situations to real characters. Of course the audience is going to be on Jessica’s side because she’s the one being hunted here. There isn’t a lot of backstory about her, but what the man finds out about her will just make the audience root for her more. Then there’s the man, who interestingly enough they paint as a regular guy besides his need to kill. He’s smart and definitely a bad man, but there’s nothing else going on there. It’s just man vs woman vs the elements that comes down to interesting showdown. 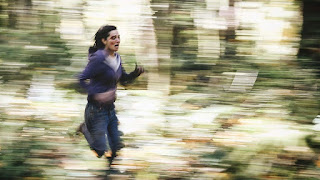 All the realness is made possible because of the great performances of Jules and Marc. Jules brings out just how fearful her character is, and then the desperation to survive once on the run. Marc maintains his character’s creepy edge, and can be straight out mean when he has to. “Alone” shows just how hard it is to be alone, especially in some of situations Jessica finds herself in early on. Her fears come true, and she ends up fighting for for her life. There’s plenty of dramatic moments, and some brutal ones, all ending with everything left on the table for both characters. Hopefully I’m not a alone in enjoying this film, and giving it 3 pools of blood!

“Alone” is playing as part of the Fantasia 2020 Virtual Festival.