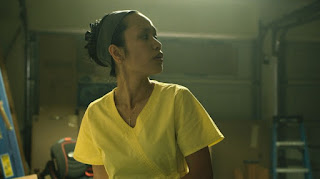 Evelyn, a young Filipina nurse, is living on an isolated estate while taking care of Dena, the aging matriarch of a Texas family. As Dena slips deeper into dementia, Evelyn begins to sense something ominous lurking behind the walls. Is the house a conduit for supernatural forces? Or is she just hearing things? As Evelyn’s paranoia pushes her to uncover her employer’s aw- ful past, she may not be prepared for the havoc her curiosity will unlock.

Directed and written by: Xia Magnus

“Sanzaru” brings a slow burn haunted house story with a few twists, and a sad ending for some. Evelyn (Aina Dumlao) is a long way from home trying to be the best caretaker she can for Dena (Jayne Taini). Dena is battling with dementia, and maybe some other things. They aren’t the only ones in the home, as Evelyn’s nephew Amos (Jon Vikor Corpuz) has been sent there to regroup after trouble at school. Also living on the property is Dena’s unusual son Clem (Justin Arnold).
Each of these people has a secret or two, and some are worse than others. Most of these secrets probably would have stayed hidden if it wasn’t for Dena’s visions, and odd behavior. That is, if it’s really her illness, or maybe there’s something haunting this house? Her behavior, along with a few other events, cause a little chaos, and some of the secrets start to rise. Evelyn starts off as an orderly caretaker, but she eventually opens doors she can’t close.
Obviously the horror here starts with Dena and her dementia. Sometimes it’s just her talking weird, and other times it’s her actions. She’s usually looking for something she believes Amos stole, or her dead husband. In something a little different, there are a pair of voices, a man and a woman, who are heard from the beginning. Sometimes it’s the audience hearing their conversation, and sometimes it’s them trying to talk to the characters. The man’s voice later becomes something a little more real, as in a red spirit roaming the house.
The house adds it’s own level of creepiness. It’s dark in some areas, has an intercom the voices use, and a forbidden room. All these things combine with a somewhat slow burn pace to set up the a mystery that unlocks many secrets including a very shocking one. Each character has their secrets exposed, but there’s  one that no one could’ve seen coming. And even though the audience will see the flaws in these people, it will be hard to hate any of them. It’s the one they know the least about that’s the true evil.
“Sanzaru” is the story of a caretaker who has traveled to America for a better life. She has tried to do what’s right, and takes her job seriously. The longer she’s there, she gets tempted to unlock the mysteries of the house, and in doing so unlocks some of her own. Dena’s dementia brings the horror to the film, along with the creepy atmosphere and lingering voices. It opens in a slow burn kind of way, but will speed up a little when the secrets are about to be revealed. In the end, the film might seem somewhat different, but is a well constructed story of someone who thinks they have it bad only to find out others have it worse. With that, I give it 3 pools of blood.

“Sanzaru” is playing as part of the Fantasia 2020 Virtual Festival.