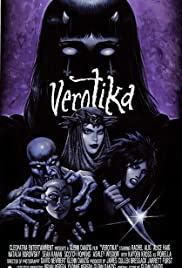 Directed and written by: Glenn Danzig

Not being familiar with Glenn Danzig’s comics might leave the audience with a little bit of shell shock once “Verotika” gets rolling. The title may give some of it away, but it’s a lot to handle. It’s a sexy women driven anthology, featuring Morella (Kayden Kross) as the hostess. She gives the usual intro and conclusion to each story in her own way. She certainly gets the party started by poking a woman’s eyes out, and sucking some blood before the first story begins.
“The Albino Spider of Dajette” is the first story, which starts with Dajette (Ashley Wisdom) getting up close and personal with a guy. Things heat up to the point when her top is about to come off, but the man is in for a big surprise. Her nipples have been replaced with eyes, and they begin to cry when the guy runs off. As weird as that seems, the tears from those eyes create another unsual being who goes on a killing spree.

The second story is “Change of Face,” and it takes place in a strip club. It follows Mystery Girl (Rachel Alig), yes Mystery Girl, who has something wrong with her face. When she’s not performing on stage, she’s cutting the face off of other women. The police pick up her trail, but can they stop her, or will she remain a mystery?
The final story is called “Drukija Contessa of Blood,” and is somewhat familiar. It’s all about drinking virgin blood to keep your beauty. In this case, Drukija (Alice Tate) is having young virgin women around her kingdom captured, and held prisoner until she's ready for their blood. Apparently she likes bathing in their blood, and is pretty merciless in getting what she wants.

All three stories present a combination of horror, and a sexual female presence. The first story might be the most bizarre, and certainly presents a different way of creating a monster. The second story picks up from a blood standpoint, but will also distract the audience with plenty of dancing women. The third story will definitely quench anyone’s thirst for blood, but seems to go on a little longer than needed.
The stories seem to lack some of the horrific punch as they amp up the imagery instead. It’s like they’re painting a picture more than telling a story. Women’s bodies are on display, in more ways than one, as the stories move the focus from nipple eyes, to a scarred face, and finishing with an obsession on youth and beauty. It doesn’t help that the acting is up and down. In the end, “Verotika” presents something different that will work for some more than others. With that, I give it 2 pools of blood.