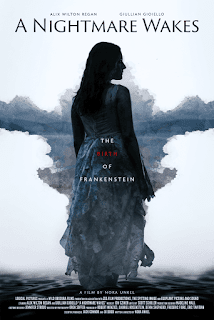 An adaptation of the novel “Frankenstein,” as told through the life of Mary Shelley. As she creates her masterpiece, she gives birth to a monster.

Directed and written by: Nora Unkel

“A Nightmare Wakes” could have been a good title to use instead of ‘Frankenstein,’ but it certainly fits this story more. A story not about the monster, but the person who penned his creation, Mary Shelley (Alix Wilton Regan). Before Mary gets to her story, the film opens on an dramatic note with a pregnant woman walking into a lake. This is clearly a sign of how this moment in her life is going to be told.

Mary, along with her husband, Percy Shelley (Giullian Yao Gioiello), are at a lake house with some of his friends. With nothing to do on a rainy night, a suggestion that each of them tells a scary story is made. They each take turns with the focus being on Mary's tale. The more the audience ventures into her story, the more the lines between the horrors of her story, and her life come together. 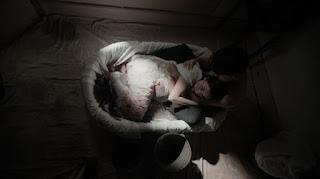 Not being familiar with her real life, and some of the truths told in this wild story might have taken a little something out of it. For those familiar with her story, maybe this story was more meaningful. It’s obvious Mary has issues with her husband and child birth. It makes sense those things would lead to a story like the creation of a monster.

Within the mix of fact and fiction are some interesting nightmarish stories. Of course the most interesting is Mary's vision of the Frankstein story. She takes herself into the story, which will keep the audience’s attention. It will be keeping up with when she’s in and out of the story that’s the challenge. 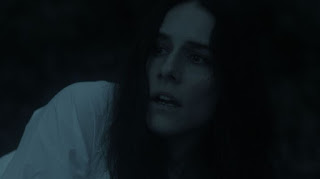 There’s a constant gothic tone to the film no matter what’s going on. It really fits the time period they’re portraying, and Mary's story. Alex Wilton Regan has a big challenge here, and she seems to do a good enough job. She does get some help by a good supporting cast.

Again, not knowing enough about Mary Shelley’s life makes it harder than usual to judge the film. I can’t really judge it on the truths, but I certainly did enjoy the horror in the story. The opening image set a good tone, and curiosity with what’s to follow. Admittedly, it’s a little bizarre at times, but still very interesting not to mention sad. Sad at seeing what Mary has to go through, but not too sad because she's about to create a masterpiece. With that said, I give it 2.5 pools of blood, and hope Frankstein doesn’t haunt my dreams!