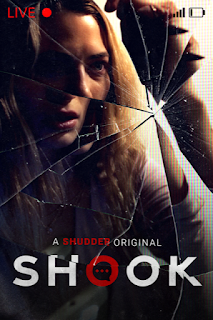 When Mia, a social media star, becomes the target of an online terror campaign, she has to solve a series of games to prevent people she cares about from getting murdered. But is it real. Or is it just a game at her expense.

“Shook” will definitely do its best to get the audience all shook up! The film gets off to a quick start with the death of a social media influencer in a restroom. In a little bit of a surprise, it appears they might not have been the target, as a dog serial killer might have been after their dog instead. The death has left another social media influencer, Mia (Daisye Tutor), feeling down and not in the mood to do her next live stream.

Instead of pleasing her friends and fans, she decides to please her sister Nicole (Emily Goss) for once. She goes to her house to watch over Nicole’s little dog Chico. This task seems a little too much for her as she loses track of the dog in the very dark house. Finding Chico is only her first problem of the night, as a familiar caller offers first to help find the dog, and then to kill it. Let the games begin! 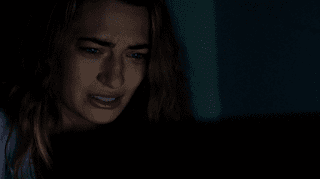 For those continuing to look for fresh storylines in horror this one follows several other new stories centered around the horrors of social media. This one doesn’t necessarily attack a specific network, but more how obsessed some can become with their presence on social media. Mia gets in trouble here because she has spent too much time building her audience, and forgot about the ones closest to her. When things go wrong no one on social media, or even her supposedly real friends can help her.

While the story might be new horror fans will be able to notice the influences of several other horror movies here. The first pair might be “When a Stranger Calls,” and “Scream,” as Mia is tormented by a caller. The caller wants her to play a game, which brings a little “Saw” into the frame. Not only do they play different games with her, she’s ultimately given decisions that will effect the lives of those around her. While this all sounds good, they might over do it a little with some debate over whether this is all real, or not.

“Shook” will try to get the audience shook with a good kill to start things off. If that doesn’t do it, there are a few moments while Mia plays the game that might, including an exciting ending. Tackling social media and influencers is a good new storyline, and you can’t go wrong with drawing influence from noticeably important horror movies. However the biggest problem here is not spending enough time setting up the characters before their downfall. Mia’s friends are important to her, but never to the audience. It also would have been nice to know a little more about Mia’s past before the twist of the story is revealed. With that said, it does just enough to score 3 pools of pool!

More about this film at: http://promotehorror.com/2021/02/05/new-trailer-poster-released-for-shocking-social-media-thriller-shook-world-premiere-on-shudder-feb-18/