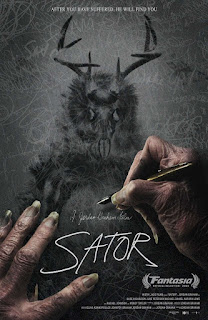 Secluded in a desolate forest, a broken family is observed by Sator, a supernatural entity who is attempting to claim them.

Directed and written by: Jordan Graham

“Sator” kind of sounds like Satan, and probably has many of the same bad intentions. It’s also something that you don’t want to discover while living mostly alone in the forest. In this case, it’s Adam (Gabe Nicholson) who’s spending most of his life in the forest. Sometimes he’s shooting bottles, and sometimes looking through the trees like he’s waiting for something. But what is it that’s on his mind?

It could be his family, who he seems disconnected from. His brother does come for a visit, but they don’t show a lot of brotherly love. The source of the problem might be their grandmother, who seems to be suffering from dementia, and the lose of her husband. She apparently can’t remember the important things, but seems to be holding onto her relationship with the Sator. Yes, it turns out the Sator is on everyone’s minds here including Adam!

It shouldn’t take the audience too long to notice a couple of things about the film early on. One is that it’s going to move at its own pace. It’s a slow burner, but the audience is going to want to pay attention to the details. Details like the other noticeable thing, which is the imagery. There are some really stunning shots including a few with the Sator. Sometimes the shots are in the forest, and other times in the house, and they all help create an atmosphere of impending doom.

The audience is also going to have to listen carefully to some tapes that Adam listens to. They’re of his grandmother talking religion, and maybe references of the Sator. Adam is trying to figure out what’s going on in her head, and the audience will be on the case as well. Did grandma make up the Sator, or is it still out there? Adam and the audience will have to wait and see if this Sator is real, and coming back to haunt this family again.

“Sator” could’ve gone the more traditional haunting route, but instead became a film of its own. Real or fake, the Sator has been an influence on this family for a long time. While Adam tries to figure the Sator out, the audience is treated to some fantastic visuals, and creepy old tapes to listen to. Nothing might beat the final images of the movie. It really is a sad tale with the Sator taking advantage of the grandma’s illness to slowly destroy this family. With that said, I give it 3 pools of blood.