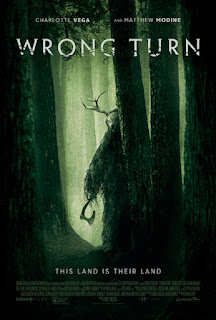 Friends hiking the Appalachian Trail are confronted by ‘The Foundation,’ a community of people who have lived in the mountains for hundreds of years.

Written by: Alan B. McElroy

“Wrong Turn” has become a franchise about producing good kills above everything else, but can it be about something more this time? This story isn't about breaking down in the mountains, but getting lost up there. This group of young friends are looking for a Civil War fort in the mountains, but danger finds them before they can find the fort. Actually, danger comes rolling down the hill at them in the form of a tree trunk, and unfortunately one couldn’t get out of the way in time.

This causes a panic amongst the group, and uncertainty with what to do next. The longer they stay on the mountain the more they become convinced that they’re being watched by someone. One of them goes missing, while others stumble upon more traps in the woods. Before they know it, the hikers come face-to-face with men wearing animal skulls. Of course that means they’re the bad people, and things go terribly wrong from here on out.

The hikers are going to get a formal introduction to the Foundation, and the audience is about to see how different they are from the crazy cannibals in the past movies. This is a whole society of people that have been living in the woods since before the Civil War. Everyone contributes to life up in the mountains, and faces their own sort of court system if they get out of line. They even speak their own language as opposed to the cannibals who just preferred to laugh all the time.

It was always easy to see the cannibals as the bad guys in previous films, but a weak case could be made that they were just trying to eat and the people came into their territory. This time around the film really wants the audience to consider who is right and wrong here. Some of the hikers end up on trial, and some of the events on the mountain leading up to how the two sides crossed paths aren’t as clear cut as they seem. Obviously the longer this goes on the audience probably won’t be siding with the Foundation, but will still have plenty to think about. 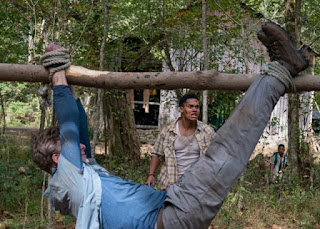 So if this is a different group of people in the woods does that mean there isn’t the usual fun death scenes? Lets say there is a certain brutality with the kills here, and none really push the boundaries of craziness like getting split in half (still love that death as fake as it was). There’s some head bashing fun and some serious stabbing going on, but also something different happens with the hikers this time. No spoilers here, but lets just say Jen (Charlotte Vega) purposes something that has long seemed like a good idea in these type of movies in order to survive. It also lets the film explore a little more about the Foundation, and throw in a few more surprises before this one ends.

To answer the question at the top, yes they prove that they can make “Wrong Turn” about something more than the kills. They actually use it to make political and societal statements throughout the film. It starts with creating a diverse group of young people, and they even go out of the way to show how these young people plan to contribute to society. They’re compared with others who might be considered blue collared workers. Then of course there’s the Foundation, who play the socialist role here. They throw these groups of people into a pot together with some misunderstandings and fear, and out comes a horror movie.

Whether the audience wants to see this angle over the “we’re here for the kills” angle will be up to the audience to determine. I would’ve been fine with the killing angle again, but certainly appreciate the effort to do more with the story this time. Besides the statements being made, it adds someone to look for the hikers, and lets the hikers try something new to survive. Also, it’s certainly a more serious film to say the least. There are still some brutal kills, and some good twists and turns along the way. And don’t forget to sit through the beginning of the ending credits for a little more fun. “Wrong Turn” definitely takes a different turn this time around, but still manages to get 3 pools of blood.

Saban Films will release the horror film On Demand, Digital, Blu-ray and DVD on February 23, 2021.

More about this film at: http://promotehorror.com/2021/02/01/wrong-turn-on-vod-digital-blu-ray-and-dvd-february-23rd/