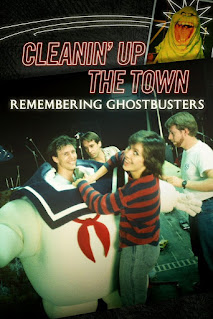 Remembering Ghostbusters is the definitive documentary charting the making of the iconic film that inadvertently changed the film industry forever. Featuring interviews with Dan Aykroyd, Harold Ramis, Bill Murray, and Ernie Hudson and including never-before seen footage. The documentary hallmarks the extraordinary achievements made for the era, and emphasizes just how ambitious an undertaking the making of Ghostbusters really was.

“Cleanin’ Up The Town: Remembering Ghostbusters” takes fans on a journey through the making of one of the surprise hits of the 80’s “Ghostbusters.” A surprise hit that has continued to effect generations to this day. It mixes in interviews with the cast and crew, and even includes some never-before seen footage. Fan will get to see how some of their favorite scenes came to be. It really doesn’t seem to miss a beat, as it basically covers the film from the beginning script through the many changes along the way.

And what are some of those changes? Well start with some of the people who ended up being casted, and those who didn’t. Say ‘Sigourney Weaver’ and obviously “Alien” comes to mind, but don’t forget about her role here. She talks about how she played her character, and the casting process. The documentary shows some other familiar faces who also tried out for the part. Another familiar face not in the film is John Candy, and they talk about his funny request and why he never got the part.

They cover a lot of the special effects in the film including their proton packs, Slimmer, the Terror Dogs, and of course the Stay Puft Marshmallow Man. Each has an interesting conversation and shows the audience how these scenes came to life. One of the more interesting stories was about lighting the Marshmallow Man on fire. They didn’t have many people lined up for that, and turned out they were a little more cautious than need be.

If you’re a fan of “Ghostbusters” than “Cleanin’ Up the Town: Remembering Ghostbusters” is easily a must see. It’s just so interesting to see how this film shaped out. How the story could have been so different, and so could have the faces that fans see. The interviews are great, especially watching how happy everyone is to talk about the film. The only disappointing thing is not getting to hear from Bill Murray, and maybe even Rick Moranis but fans are probably used to that by now. With that, I give it 3 pools of blood, and a loud yell of ‘Ghostbusters!’