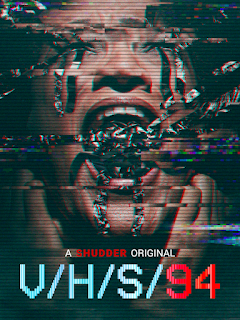 A police S.W.A.T. team investigates about a mysterious VHS tape and discovers a sinister cult that has pre-recorded material which uncovers a nightmarish conspiracy.

The days of the VHS are pretty much gone, but the VHS franchise still has some life in it bringing horror fans “V/H/S/94.” Similar to the other entries in the series, a group of directors/writers team up to each contribute a short film that makes up this anthology. This one brings in some new faces along with some who have worked on some of the previous movies. All with the experience to create some good horror, and raising the expectations for this chapter of the franchise.

The movie starts with the wraparound story of a S.W.A.T. team converging on a warehouse. Someone is filming the raid, as the team enters the building looking for the bad guys. Unfortunately, it’s absent the drug dealers they’re looking for, and filled with a lot of mysterious things. Of course one of those things are the VHS tapes that are being played on television sets in the warehouse. 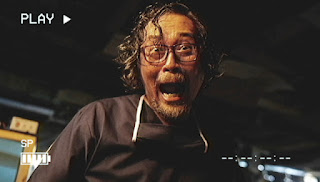 The first tape starts with a newscast that mentions sightings of a ‘rat man.’ It then follows a reporter and her cameraman as they film outside a sewer entry. Soon enough, they find themselves inside the sewer, and confronted by some unusual people. It all leads to a really fun and unexpected ending.

After a brief view back in the warehouse, the next tape starts in a funeral home. A young woman is left in charge of a wake, as the director of the home leaves for the night. A thunderstorm is happening, and no one has shown up yet. Before she knows it, she starts hearing things, and becomes convinced that the body is moving in the casket. Things take a turn just when she finds out who really is in the casket. It won’t be a total surprise at what happens next, but it’s definitely creepy and a bit disgusting. 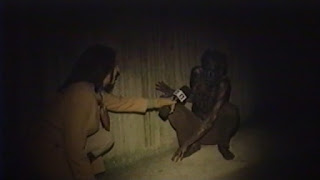 Back to the S.W.A.T. team, who continues to come across strange settings, and more dead bodies. They were so brave heading into the building, but now can’t wait to get out. The third tape involves a mad scientist, who’s trying to combine man and machine. He's working on both a male and female subject, and has a certain level of success with each of them. Before he can finish his lab is found by police, and killed for his crimes.

However that’s just the set up, and the excitement is about to begin. The police force is going to end up trapped in the building, and having to fight one of the scientist’s creations in order to escape. The audience is treated to some brutal deaths before they get probably the most interesting perspective of all the films. If any of the audience members are gamers, they’ll certainly appreciate what’s about to come. And if they’re just horror fans, they’ll also enjoy the carnage that’s coming as well.

There will be a clue to what’s happening in the wraparound story before jumping into the final tape. While this is supposed to be in 1994, part of this story could have been played out over the last few years. A group of anti-government militia members are planning a dangerous mission while hiding out in the woods. They come up with a very creative way to make a secret weapon to plan their attack with. Too bad after having a little too much drinking fun their weapon backfires on them. The audience will be treated to yet another blood bath! 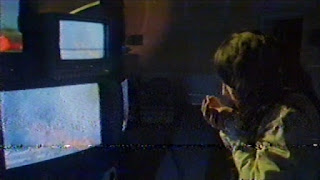 With that the wraparound story comes to a conclusion as well. Probably the least surprising ending of them all, but certainly fitting with how most of the films played out. As expected, “V/H/S/94 turns out to be a solid group of short horror films. The directors/writers craft films that are perfect for the V/H/S franchise, and more than one might find its way near the top of the best shorts of the V/H/S series. It warms up the audience with some creature effects, and creepiness. It then finishes with two very different films that will satisfy any fan of blood and guts. The wraparound story does its job of holding it all together in-between tapes. Because of its creativity and blood splattering moments, I give it 4 pools of blood.