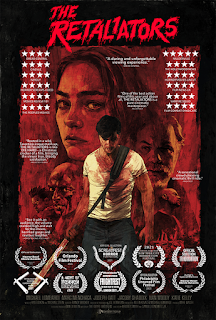 An upstanding pastor uncovers a dark and twisted underworld as he searches for answers surrounding his daughter’s brutal murder. A high-octane original soundtrack and cameos from some of the biggest names in rock music set the tone as this horror-thriller reveals a game of revenge played using a new set of rules.

This movie makes it clear that in life you’re one of the “The Retaliators,” or be prepare to be run over time and time again. Bishop (Michael Lombardi) is a pastor, and a father to two girls. He has to set a good example for them as a father, and because of his religion. That puts to the test early on when they’re trying to buy a Christmas tree, and a rude man takes the tree they wanted. Bishop could’ve retaliated, but let the man take off with the tree.

Later he uses this story in church as a lesson to all. Everything is going so well that he decides to let his daughter Sarah (Katie Kelly) take the car, and go to a party. A series of unfortunate events happen before she gets there, and ends in her death. Bishop is overcome with grief, and will soon enough end up with a chance to be a retaliator again.

The film opens with a scene that gives the audience an idea that it’s going to be one type of film, but actually really isn’t anywhere close to that until the final act. It then sets up the tragedy, grief, and then a quick police investigation. Bishop meets Jed (Marc Menchaca), who is the detective on his daughter’s case. He promises the pastor that he’ll find out who did this, and tells him why solving cases like this is important to him. There’s also an introduction into a war between some gangs that has been reignited, and played a part Sarah’s death and events to come. The audience will eventually get how everything is connected, however it seems a discombobulated.

Once the film starts moving into the third act things really pick up. No spoilers here, but Bishop will get a chance to come face-to-face with his daughter’s killer. Can he actually be a retaliator when it counts? While he worries about the consequences of that, he doesn’t realize a whole different set of consequences that are about to unfold as well. The audience finally sees how that opening scene came to be. For those looking for blood and guts (which I always am) they’re going to get plenty of it. Lets just say everything evil in this town got a whole lot worse, and has been unleashed.

Say whatever you want about “The Retaliators,” but the film sticks to its name. Bishop is faced with several opportunities to retaliate before eventually realizing that in some cases it's alright. Other characters get their retaliation as well, even going to some extreme levels. The crime war continued on because someone always has to make the next move. All of the retaliations here lead to a beautiful blood bath of an ending. Oh and to top that off there’s a great soundtrack, and killer rock cameos from Mötley Crüe’s Tommy Lee, Five Finger Death Punch, Papa Roach, The Hu, Ice Nine Kills, and Escape The Fate. With that, I give it 3 pools of blood, and hope there’s no retaliation for that rating!

“The Retaliators” played as part of the 2021 Screamfest Film Festival.