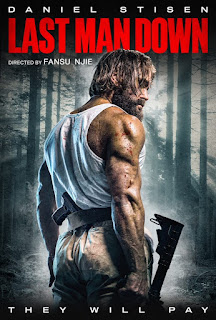 John Wood left the pieces of a broken civilization behind, to go back to his roots in the woodland, after a virus pandemic struck the world.

The “Last Man Down” means he must have put up a fight and that’s what John Wood (Daniel Stisen) does. Unfortunately the fight for his wife is over early, as Commander Stone (Daniel Nehme) kills her when John fails to answer his questions. John is then experimented on before managing his escape. Years later he’s isolated himself in the woods, away from the soldiers and the community that’s fighting a virus.

Like many soldiers have found out before, you just can’t escape it. Soon enough Maria (Olga Kent) wonders through the woods to his cabin in pretty bad shape. She was being held captive because her blood has the cure for this virus. John helps her recover, and gets her settled in just as a few soldiers come looking for her. He disposes of them, but knows they’re only the beginning. The two now get ready for the fight of their lives…literally!

It’s a little surprising that this action film starts off a little slow. Yes, there’s the dramatic scene of John’s wife getting killed, but it didn’t open with a bang. Even right after that, John manages a less than dramatic escape. Then the film takes time to paint John as a woodsman, and has to get Maria into the mix.

To their credit, they finally get the balling moving by sprinkling in more and more soldiers to die at the hands of John and Maria. They actually make a good team while taking out the bad guys. While not a largely comedic movie, there’s an interesting scene of John taking a few men out while handling his business in the bathroom. It builds and builds as Commander Stone has to almost send his entire army to get them before of course the two men come face-to-face again.

“Last Man Down” shows just how hard it is to take that man down. John suffers tragedy early on not to mention being experimented on as well. Just when he thought that life was over Maria enters leaving him no choice but to protect her. The two become a great tag team taking down bad guy after bad guy. The action gets bigger, the gun fights go wild as an entire army basically shows up to take them down, and it continues to drop one liners left and right. It sets up another dramatic ending with a little bit of a twist. With that, I give it 2.5 pools of blood.