THE SPINE OF NIGHT REVIEW 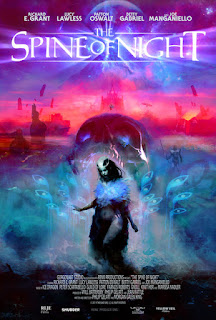 Ultra-violent, epic fantasy set in a land of magic follows heroes from a different eras and cultures battling against a malevolent force.

Directed and written by: Philip Gelatt, and Morgan Galan King

“The Spine of Night” will definitely require a spine to watch it. This fantasy adventure starts with Tzod (Lucy Lawless) making a long journey to a cave in the middle of nowhere. She’s looking for the bloom, a special flower with some strong powers. Just as she finds it she’s met by the Guardian (Richard E. Grant), who like his name implies is in charge of watching over the flower. Are they about to battle over the flower?

No…instead the battles occur in the stories that are about to be told. Tzod begins to tell her tale with the bloom. It sets the stage for the history she is about to discuss, and how the bloom ultimately ended up here. The Guardian also steps in to share some stories of his own, but Tzod is still the main storyteller here. Everything started with her, and now has come full circle. 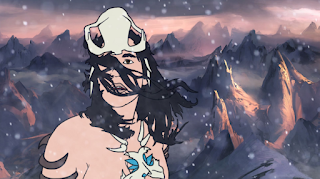 As the film opens the audience is going to be taken into a whole new world. The animation is going to keep their eyes glued to the screen. There’s something basic to it, yet still filled with detail and just the right colors. It really comes to life when the more magical parts of the stories hit.

The stories also have something else to love…bloody violence. Falling into the wrong hands, the bloom lets evil people unleash their armies on others. The fighting between good and bad leads to plenty of animated blood being spilled. Bodies parts and lives are lost in story after story.

Even though this is a fantasy film, it won’t be lost on the audience the good and bad of human nature displayed. The bloom leads some people to do some bad things, as their hunger for power grows. It also shows the good, as there are people willing to fight for what they think is right. The good and bad battle leading to some gloriously bloody scenes. Scenes filled with great color and animation. With that, I give “The Spine of Night” 3 pools of blood.

THE SPINE OF NIGHT will be available in theaters, on demand and digital October 29.