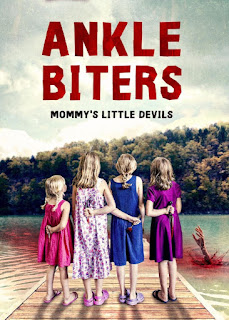 Sean, a pro hockey enforcer, has fallen in love with Laura, a widowed mother of four young daughters. When Laura’s children mistake an act of lovemaking as an attack, they plot to protect their mother at all costs and with horrific results.

If only these four girls were just “Ankle Biters,” and not soon to be murders! Sean (Zion Forrest Lee) has recently retired from hockey, and he believes he might have found the perfect woman to spend his retirement with. Laura (Marianthi Evans) seems to be just as happy with Sean, and says yes when he asks her to go on vacation with him. Joining them will be her four young daughters who are eager to learn more about Sean.

Once they get settled into Sean’s vacation home the girls start looking into Sean. They find a video of their mom and Sean roleplaying in bed, but mistake that as their mom being hurt. From here on out they plan to get back at Sean, and make his life as difficult as possible. Unfortunately, things spin out of control, and the girls take it much further than originally planned. The rough and tough hockey player is about to meet his match! 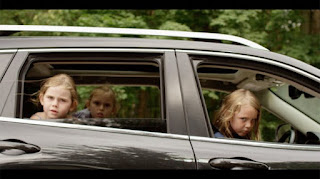 Horror fans have seen kid killers before, but maybe not a foursome like this. They’re so cute, and no one would ever suspect them of doing anything wrong. Unfortunately one or two of them have just enough of an evil streak in them that pushes their actions too far. It’s these actions that bring the fun in the movie even if it might be a little hard to believe that these girls could actually do them.

Getting to that fun ending is another story. There’s nothing wrong with Sean and Laura’s characters, but they’re not anything different from other couples audiences have seen. It might have added a little spark to the movie to spend a little more time on the girls. Maybe even have taken their point of view more than Sean’s. Then again, if they wanted to show Sean take another eye from someone on the ice that would have been welcomed! 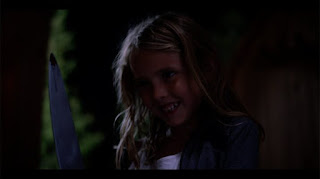 “Ankle Biters” has all the pieces for a good horror comedy. A couple getting to know each other more and more. Strange family members, and awkward relationships with friends. Oh and of course four young girls who have all the right intentions in protecting their mom. However it seems to have something missing to put it over the top. Maybe a quicker pace, and letting the audience get to know the girls like they get to know the couple would have helped. Sean finally facing off with the girls is easily the best part of the film. With that, I give it 2 pools of blood.

More about this film at: http://promotehorror.com/2021/11/05/ankle-biters-coming-to-on-demand-and-dvd-november-16/