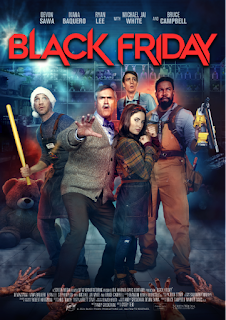 A group of toy store employees must protect each other from a horde of parasite infected shoppers.

“Black Friday” draws crowds, but this isn’t the kind of crowd anyone wants to see shopping or anywhere! Ken (Devon Sawa) is on his way to his shift at We Love Toys on Black Friday along with several co-workers. He’s one of the more prepared workers for the crazy shopping event, but some of the others aren’t. Store manager Jonathan (Bruce Campbell) is definitely prepared to ring the registers. There’s no turning back as they open the doors, and in flows the shoppers.

As the shoppers make their way around, some make it easy on the staff while others are ready to raise hell. Unknown to staff and shoppers a parasite has already taken over someone, and is about to start spreading the infection to others. The staff thought the shoppers were scary, but they haven’t seen anything yet. Before they know it Black Friday becomes a true nightmare as they fight for survival and a way out!

Before touching on the story and characters, lets start with what many horror fans want to see…great special effects and plenty of blood splattering fun! They do a fantastic job with the makeup on all of the shoppers who get turned. Many of the shoppers turn into what seem to be zombies which is a great start. Then there are a few others that make a full transformation, and they look awesome. If that isn’t enough, the staff is going to have a really huge surprise to deal with before it’s all said and done. And yes plenty of blood flies as both parasite shoppers and staff meet their doom!

As for the story, it’s very simple in the set up yet has a good mix of characters. It appears a meteor shower might be behind all the mess, but it’s never clear and doesn’t have to be. The important part is the shoppers become infected, and the staff fights to survive. None may fight harder than Ken who wants to make it back to his kids. He’s also battles with a need to protect his fellow co-workers as well. Jonathan plays a cowardly manager, and as expected Bruce Campbell nails his role. While each character seems to have their comedic moments, Chris (Ryan Lee) might be the funniest being scared of everything mostly because he’s a germaphobic. Ryan pairs great with Ivana Baquero, who plays Marnie, as they try to hold off the creatures.

No doubt “Black Friday” is a nightmare for many people, and it’s about time someone turned that nightmare into a killer horror movie. From the start, the audience is going to know it’s in for some laughs, and blood splattering fun. The SFX is top notch, and particularly stands out with the shoppers that fully transform. There’s a good mix of characters giving different reactions to what’s happening, and how to survive. No matter who they are, at some point the audience will be laughing at them. The performances from Bruce to Devon, and all the way down are terrific. This can easily be added to the list of must see holiday themed horror movies to see year after year. With that, I give it 4 pools of blood, and will be staying clear of Black Friday shopping!